I'm still waiting to redeem all my Easter calories. I finished Easter with a raging sore throat - probably because I went running with a slight tickle - which made chocolate taste disgusting. So Sunday was a bit of a bust. Iven and Sam and I went to the movies but for the most part I just lay around and read my new Jodi Piccoult novel.

Then Monday came and nothing much had changed with the throat so I spent the day cutting out pieces of lycra to applique on aerobics costumes.

Then Tuesday dawned and my throat wasn't sore any more but boy, was I coughing. Didn't go training on Tuesday morning because I'd spent most of the night on the couch trying to cough up a lung. It was still part of the long weekend - officially Easter Monday (confusing) - so Iven and I hit the shops to kill some time, have a good coffee and find stuff for the kitchen. It's funny, I hardly coughed at all during the day after having such an ordinary night. When we got home it was time to bake. 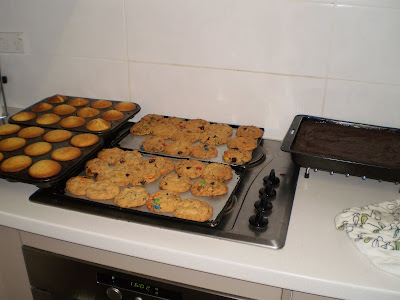 A double batch of lemon cupcakes, triple choc cookies and a big tray of caramel brownies. My kitchen smelt good! And I've included a picture that shows the new tiles. 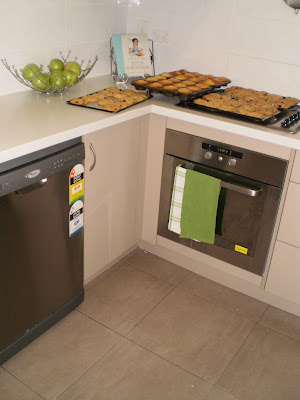 I was really hopeful of a good night's sleep last night but it was couch time again. And after a few hours on the couch I went back to bed but I think I must have been coughing in my sleep because I managed to chase Iven onto the couch. And the piece de resistance came this morning when I coughed so much that I vomited (a little bit) onto my pillow.

But rather than leave on that note I'll leave you with an Easter story from my Mum. She has two dogs Benson and Pete who are very big and black and boisterous. Just before Easter Mum and Dad went shopping and bought lots of eggs and chocolate and Mum decided to leave them on the guest bed. But the guest bed was not high enough and Ben and Pete preempted the Easter bunny and ate about a kilo of chocolate - wrappers and all. And when Easter Sunday came it looked like Mum and Dad had prepared for an Easter hunt in the garden - only the wrappers were inside the brown stuff and the brown stuff was not chocolate.

Hope you all had a lovely Easter.
Posted by Char at 3:16 PM