What Makes a Great Run? 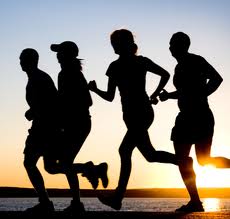 I had a great run on Saturday.

Great runs have been few and far between in the last couple of years. Don't get me wrong - there have been okay runs and good runs. There have also been some awful runs. Runs where I have considered faking an injury just so the pain would stop. Runs where the only thing that has kept me going was my fierce pride and stubbornness. And sadly, there have been some runs when pride and stubbornness was just not enough and sheer exhaustion made me walk.

So it was exhilarating to have such a good run. And it's encouraging to know that three months of running cream into my arm daily is starting to pay dividends. I'm finally getting some endurance back.

But Saturday's greatness was from more than just the use of performance-enhancing drugs. (I don't consider them performance-enhancing because they're just getting me into the normal range - there's nothing super-human happening here). There were a lot of factors that combined that made it feel so good and they're things that I've learned by trial and error (mostly error because we learn more from our mistakes) over a few decades of running.

1. Fuelling - This started on Friday.  I made sure that my last meal had plenty of complex carbohydrates in the form of brown rice (with a nice chicken yellow curry over the top). The simple carbohydrates that I had afterwards were more for my taste buds and to ensure that food guilt would stop me from piking on the run. I also made sure I was well hydrated. Saturday morning pre-run I had a banana and water and I brought along honey sachets for in-run fuelling.

2. Start out slow - I have sabotaged countless long runs by going too fast at the start. Yesterday we were running at over 6 min/k for the first few kilometres and that's just perfect for me. I got to the 12k mark feeling remarkably fresh. A few months ago running 12k was pretty much my limit.

3. Have entertaining company - There was a lot of banter and even more cheek dished out on Saturday's run. At one stage I even had to smack the coach on the back of the head to bring him back into line. Luckily there were no witnesses (the hand is quicker than the eye) so I guess it never really happened. Being entertained on a long run really makes the kilometres fly by.

4. Run a scenic route - There's nothing less inspiring than having to run where there's no green or blue. By green and blue I mean grass, trees and water. Admittedly the water that we ran next to is more brown than blue but water is water. Seeing wildlife adds a couple of bonus points to a long run. Admiring a duck family or laughing at the antics of a dog who's all kinds of happy for being out on a walk, can really make a run.

5. Run where there's lots of people exercising - It's inspiring to see other people who've gotten out of bed at ridiculous o'clock to sweat. We ran past other runners, cyclists, walkers, rowers and boot-campers.

Most of the group were running 14 kilometres and only a few continued on to either 16 or beyond. I managed to convince my running companion to take a loop through the Gardens instead of running an out and back section. I'm a rebel without a cause inciting my own little mutiny in the quest of a scenic route. This little deviation from the route ended up making the run a little longer but it didn't phase me. The running Gods had smiled on me yesterday and I was able to do the extra kilometre without bargaining, whimpering, pretending I needed to stop for another drink, or fake-pulling a hammy.

Saturday's run wrapped up a really good week. Fifty-seven kilometres over four sessions. It'll be interesting to see how I back up this week.

Does anyone have any other tips on completing a successful long run?
Posted by Char at 12:40 PM