Just One of THOSE Days

I started a different post yesterday but events transpired and all of a sudden yesterday's post seems a little insignificant.

It started out completely normal for a Saturday. Well not completely normal. It was pouring (not that that's unusual this year) and I had my long run to get to. My inner sloth told me that it was much more sensible to stay in bed BUT I'd threatened two running friends with public shaming if they didn't show so how could I pike?? So I got dressed in the cold and dark - or tried to get dressed. I'd forgotten to put out my running bra. That meant a surreptitious sortie into the bedroom to retrieve said vital undergarment. And of course in my addled early morning state I chose the wrong one - cross-backed not standard. You men out there have it so easy.

By the time I turned up at our meeting spot the rain had almost stopped but that didn't last long. It was a very wet 21.5k. So wet that no amount of Body Glide could stop the chafing that I discovered when I hit the shower. But hey, I'd just run my longest run of the year in my biggest week of the year and it was one of those runs where I could have just kept on running. That little bit of chafing was like a medal of valour.

Run done, it was time for all the fun Saturday morning stuff like breakfast at a cafe (yum), shopping for our fruit and veg for the week (a necessary evil), unpacking said shopping and getting a load of washing sorted. Yep, Saturday's can be a barrel of laughs.

Usually the next thing on my list is to have lunch and then a nap. But I had other plans - a little bit of dress shopping with a wedding party. My friend Bec is getting married in June and is having a very small wedding - the bride, the groom and six guests. I've been honoured to have been one of those six. The plan was for all of the guests to colour coordinate so we can get some amazing photos. So Saturday we were going to look at fabric.

Successful shopping trip over, we returned back home for a little puppy meet and greet. I introduced Iven (who had been home doing some handyman stuff) to the girls. They had to leave and I finally went upstairs to sit down only to find Iven clutching a wad of paper towel to his hand.

"Just got myself with the angle grinder." 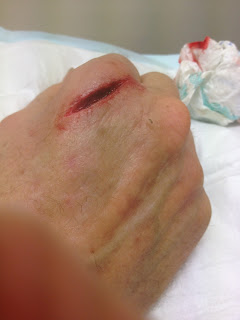 That's never going to be a good thing. Flesh meeting flesh-eating electrical device. I asked to see the damage and I was right - as I usually am. We were heading to the medical centre for stitches. But after seeing the doctor we were back in the car heading to the emergency room for hand surgery. Seems the angle grinder is also good at cutting through human tendons and Iven was no longer able to point with his Peter Pointer. No extensor tendon means that another line of communication is cut off if you're a male who likes to grunt and point.

Two doctors and a surgeon later (and three hours of just sitting and waiting) and the verdict was that yes, the tendon was cut and yes, he was to have surgery and yes, he had to stay in overnight. 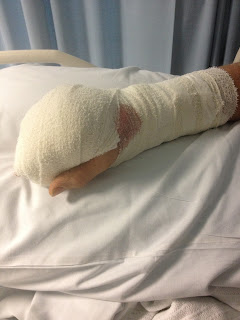 Surgery was yesterday and it went well but he had to stay in overnight again to recover from it. He should be home some time today but hospitals are vortices that swallow time so heaven knows when it will be. And yes, this is my busiest week of the working year so far with deadlines that absolutely can't be missed. Swearing a little in my head!


Oh and in the middle of this I get my period. Surprise! Four days early. Lucky me.

But despite all this drama (note to the universe - I've had my fair share now. Please stop flinging crap at me), I'm still counting Saturday as a really good day. A great long run PLUS a new dress - doesn't get much better than that. 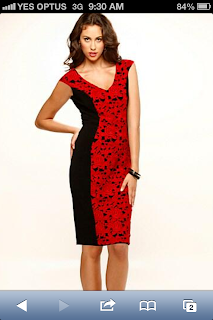