Saturday was bitter-sweet for me. Surprisingly, this has nothing to do with running. I know that'll come as a bit of a shock seeing as running is pretty much all I think about at the moment (along with sleeping and eating).

This post isn't to boast about the fact that his team had only lost one game in their whole season (which they had). Or to boast that they won 4:3 (as they did). Or to boast that it was my son that scored the winning goal with only minutes left in the game (which he did). No, this post is all about what can happen when you let your child find and follow their passion. 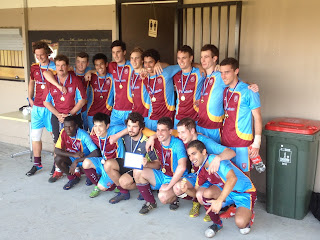 Sam was obsessed with football from the minute he went to primary school. I'm not really sure how it happened because football is not traditionally a big sport in Australia, unless you're talking about the other codes - rugby league, rugby union and AFL. Football just doesn't get a lot of coverage over here so it wasn't like we followed it as a family. It's just something that Sam loved to do. He spent hours kicking and chasing balls around with his mates and kicking a ball against the wall of my workroom until it drove me to distraction.

When we finally joined him up with a team it was all his dreams come true. He got to train a couple of times a week and play a match every weekend. And being involved for so many years he learnt some valuable life skills.

He learnt discipline. His first coach was a Scotsman who didn't put up with any rubbish from the boys. If they misbehaved they had to run around the pitch a few times or do push ups. If they missed training they had to sit on the bench for the start of the match.

The team was graded in a high division which meant the boys were competitive and the coach believed even at a young age that if they wanted to be competitive then the best players would be the team that started. The other boys would sit on the bench and get substituted on. It was a harsh lesson for some boys (and their parents) who thought that everyone should have equal time. But there were social teams that were formed for that reason and the coach encouraged parents who thought that way to think about joining a different team. For the boys who wanted to be competitive they were encouraged to improve their skills to keep their spot. Sam didn't always start but he worked really hard on his ball skills to be starting regularly by the end of the season.

He also learnt to push through discomfort. Both in training and in matches. He learnt that he could play with a headache, if he was tired, if he felt a bit sick or if he had a niggle. He's played with corked thighs, with colds, with grazes, cuts and scratches, with strapping tape to protect injuries and once he even played with the flu.

He learnt to work as part of a team. He started his football life as a defender which isn't a glamorous role. Defenders never get the glory of scoring a goal. But a team doesn't perform unless it's got a good defensive line so he learnt to be a workhorse without expecting any glory. Later on he got moved up to midfield which he loved but if a defender was away Sam would be called on to fill the role whether he liked it or not.

He learnt to respect authority. Both of the coach and the referees. He didn't always agree with them or with calls that he thought were wrong but he knew that he had to accept them or accept the consequences of no complying. No one wants to get a red card for arguing with a referee when it means sitting out the next game (or two) and letting your team down.

And he learnt resilience. There were times of bitter disappointment. Like when he had to miss a semi final day to sit his high school entrance exam only to have his team lose and to have his season over. Or like when he was tackled illegally by an opposing player in another semi final leaving him with a severely sprained ankle which put him on crutches and unable to play the final match. But he worked hard to rehab the ankle so he'd be back to play again the next year.

Football also gave me a lot. I made lots of friends. I got to spend a lot of quality time with my son driving him too and from games. I got to share with him a lot of highs and lows which made us grow closer. And I got to know a lot more of Brisbane than I'd ever known before - I can navigate to lots of suburbs as long as there are football pitches there.

The reason why Saturday was so bitter sweet for me was because it might be the last time we get to see Sam play. Next year he will probably be moving interstate to start the next chapter of his life. No more sitting on the sides of football pitches in the cold and the wet and the wind. No more yelling. Or complaining about refs. Or having the slight cat-pee smell of his sports bag come wafting upstairs.

... until the grandkids come along. And then I get to be the cool grandma who actually understands the offside rule. And will be happy to go to every match. And bake for the break up. Now to convince the kids to procreate just so I don't have to give up my football addiction for too long. 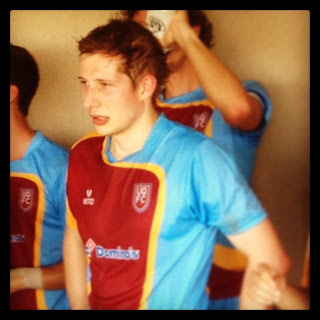