I'm so over summer.

I'm over the heat, the humidity, feeling sweaty and sticky. I'm over limp hair, not being able to enjoy a cup of tea, sleeping with a fan on, cold showers. I'm over feeling wrung out and tired.

And it seems as though I'm not the only one whose whole focus at the moment is trying to stay cool.

On Tuesday, after sculling my second water-bottle, I had to make an urgent dash to the toilet. I lifted the lid and nearly wet myself with surprise. A fairly large skink was swimming around in the bowl. 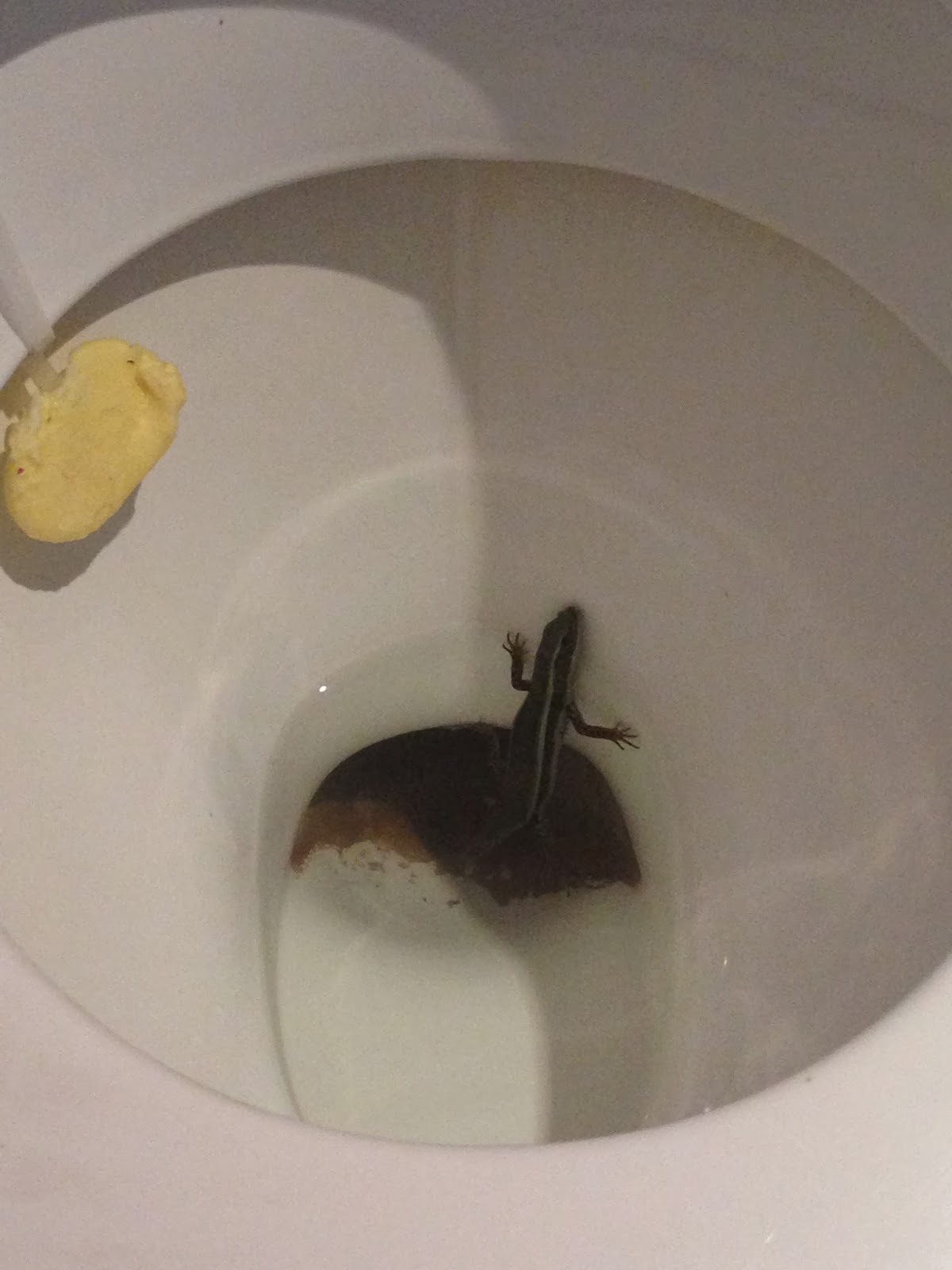 Of course this presented me with a quandary. Do I just use the toilet and to hell with the skink - after all it's a human toilet not a lizard swimming pool? Do I race upstairs and use the toilet up there? Or do I test my control and get my phone to take a photo to put on the blog?

You'd think that being a diligent blogger I would have chosen door number three BUT I have given birth three times and tend to err on the side of distrust when it comes to sphincters so, despite the rigours of my weekly battle to the death with Bevan (yeah, I know I promised I'd stop writing about you but you seem to enjoy it so much) AND being an animal lover from way back, option number two seemed like the only good choice for everyone involved. I took the fact that my quads were burning at the top of the stairs as a positive that I'd really put in during speed.

I did race back downstairs once I was done to grab my phone but the skink had vanished. I thought that she'd managed to swim her way out of there the way she'd gotten in but, as you can judge from the photo, I was wrong.

When I went back not that long after (I told you I'd sculled two water-bottles full) there she was swimming around again. This time I chose blogging over bladder and went for the phone. She swam out of sight after I'd gotten the photographic evidence that I wanted and I thought I'd help her out by making sure that she was swimming with the tide, by flushing the toilet. A girl can only cope with seeing a lizard in her toilet just so many times.

But I'd underestimated the determination of this particular lizard to remain in this climate-controlled oasis. Yep, next time I went to go she was back. I encouraged a retreat with the toilet brush then polluted her lovely swimming hole and, as I flushed, I yelled "Surf's up".

I didn't see her again for the rest of the day so I thought I'd won the battle over the possession of the downstairs toilet.

Just a little aside here - the downstairs toilet is right next to #3 son's bedroom and he and his girlfriend have been away this week visiting #1 son down in Melbourne. I'm pretty sure that his girlfriend would prefer that there was no reptiles underneath her if she needed to go so I had a strong incentive to get rid of our new pet, who I've called Loo-Loo, before they came home.

The next day I went back to check. No, I hadn't won. Loo-Loo was back but she seemed to be quite keen to get out when she saw me. The whole total lunar eclipse thing followed by an acid rain downpour that I'd inflicted on her must have been quite unsettling. The porcelain was too slippery for her to gain any traction so I provided a ramp. 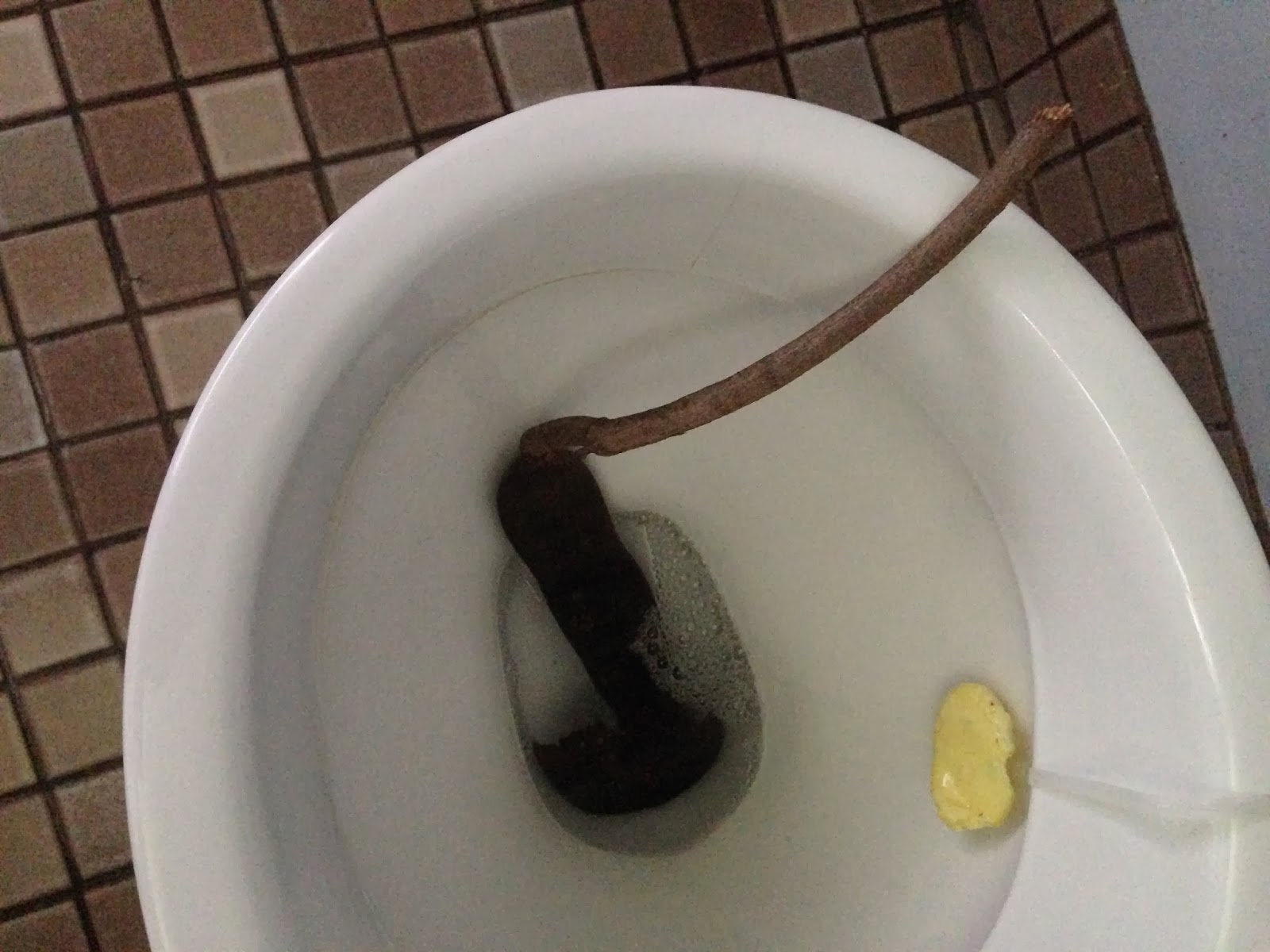 I couldn't hang around to see if she took advantage of my escape route but she hasn't been sighted since. So I'm assuming that she's gotten out and disappeared out the back door. That makes me so much more comfortable than the other two alternatives - that either she's lurking in the bedroom or still in the toilet biding her time to exact revenge.

One thing's for sure - I will be checking the bowl before I go from this time forth until I die.