I thought I was holding it all together so well for this marathon. I seemed to have a handle on the taper - relaxing, rejuvenating, refreshing all those muscles that have worked so hard for months.

And then someone tooted at me on the way home from Saturday's long run - which was only 12k so actually wasn't long at all - and I realised just how tenuous my grip on control was.

I was wanting to turn right at a set of lights but there was a car coming so I stopped to let it pass. That's me - considerate on the roads. Trying to not make the other driver slam on his brakes to avoid a nasty start to his morning. But that wasn't good enough for the driver behind me who'd obviously slept in late for his incredibly important appointment.

Yeah, I might have cute doggy paw print decals on my car but that doesn't mean I roll over submissively to have my belly rubbed if someone's trying to intimidate me. Add in lack of mileage to keep me at a nice calm zen level and stop me from overthinking AND a healthy dose of PMS and I went from zero to indignant rage in 2.4 seconds. Gesticulated wildly so the other driver was sure to notice then drove through the intersection at an incredible 40k per hour just to annoy him. As I said - I wasn't in a hurry, even if he was.

And then I got a little freaked out because he was taking every turn I was taking. I thought for a moment that I shouldn't have poked the bear (even if he had no qualms in doing so). I even planned how I was going to exit my car and race upstairs to get reinforcements if he pulled into the driveway after me. And I was sincerely grateful that I had only run 12k instead of 37 because I'd have a reasonable chance of getting out of the car and up the stairs in less than the 10 minutes it usually takes.

Luckily he kept driving straight when I took a right turn and breathed a sigh of relief.

So maybe the taper crazies are starting to get me just a little.

I'll freely admit to being paranoid about anyone who coughs or sneezes within my vicinity. And I'll admit to wondering if I was coming down with something all day Saturday - which was a great excuse to laze around all day and read. Then there's all the potential hazards I've imagined from everyday events - like slipping down the spiral staircase when I was sweeping it the other day and potentially rupturing any number of tendons in my knee or breaking my ankle or being bitten accidentally in the middle of a doggy play-fight and getting a nasty infection. I even refused to speak to Iven for half an hour after he threw a ball IN THE LIVINGROOM and Ricky barrelled into my shin. He might not have noticed that I wasn't speaking to him because he often blocks me out while he's doing the crossword.

Not sure how I'm going to keep it all at bay this week without being able to run very much. I might do a bit of baking because that's my other go-to sanity-saver. I just need to wait until Sunday's cake has been eaten because there's no room in the freezer for any overflow. My family may just have to sacrifice any thoughts of eating healthily this week on the alter of my taper madness. 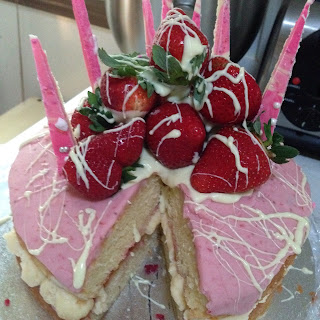 So just a little warning to anyone who's driving around the western suburbs of Brisbane in the next few days - if you see a little blue Swift with paw print decals on the back don't toot. I'm pretty sure that I wouldn't be held responsible for my actions in court.
Posted by Char at 6:17 PM