I've actually been doing what I said I'd do.

This might seem a strange statement for the decisive, pro-active amongst you but to the procrastinators it's significant. I will often say that I'll do something and somewhere along the way the impetus to actually get it done fizzles away. A bit like a sparkler on Guy Fawkes night - not that a lot of you will remember what Guy Fawkes night was. That was back in the day when it seemed like a good idea for fathers across Australia to put a match to explosives for the entertainment of their kids and the kids got to hold spitting flames in their hands while wearing highly-flammable nylon nighties. Seems a pity that our nanny-state government did away with it.

But I digress. Back to doing what I said I'd do. And my grand sweeping statement of change had to do with running my next marathon without ITB pain for over 21km. Yes, that pain made such an impact on me that I rang up Bodytrack the day after my marathon and booked in an appointment.

Bodytrack is where my exercise physiologist/physio son used to work before he left on an extended working holiday to Melbourne. I'd say he moved there (which is actually the truth) but I like to keep my delusion, that he's only gone for a little while, alive and well.

I managed to get a booking with Dan Harth who was a student doing prac work when Sam was there. And so far I've been very impressed.

Firstly Dan asked a few questions about my goals for the sessions. That was easy. Running without pain and reducing the risk of injury. Then he got me to walk. Just up and down and up and down.

I walk all wrong apparently. My feet turn out like a duck. My hips roll. My knees collapse inwards. My glutes do almost nothing. No wonder I've been getting a few niggling injuries. I'm probably lucky that I haven't had more.

The first session ended with him giving me a couple of interim exercises to do in the week till my next appointment when I'd get my full home program.

So I went back a week later after doing my exercises religiously and Dan was ready for me. He had a list of exercises that are designed to get my lazy glutes and core actually working. None of them were particularly hard. It's not like I have to squat with 100 kilos on my back. It's all about getting the right muscles working and the right patterns of movement.

I was sent home with a promise of an email with a link to my program which I can download to an app, TrackActive, on my phone. They didn't have this back when my son was working there and I can honestly say it's a fantastic tool to have access to. My program was there when I logged into it - the exercises, the sets, the reps. But the thing that's so good is that it comes with a series of photos for each exercise so if you've forgotten (which I generally do) you can get a quick reminder. And if that's not enough, there's also a video plus a paragraph with reminders of things that you should focus on during the exercise. Things like maintaining a neutral spine, drawing up your abdominals, contracting your glutes during the lift ... 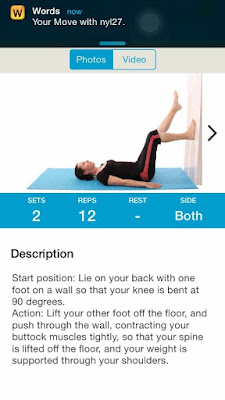 The program times the session and at the end you have to rank your performance and leave a comment. I didn't realise that the comments were interactive. The other day after my mid-week long run I was doing the exercises and was getting hamstring cramps during the hold phase of the bridge so I mentioned it. The next day I got an email from Dan to say to place my foot closer to my buttocks and concentrate on using my glutes. Wow! I didn't have to wait till the next session and try to remember to let him know.

The following week it was all about the Clinic Program which is different to what I do at home because I get to use the equipment they have there. Again it didn't seem too arduous. That was until 3/4 of the way through the session when I had to get down onto the floor and I realised that my legs were like jelly.

So this is week four and I'm noticing things like my glutes being tired after a running session. In fact I'm noticing that my glutes and core are working during my everyday life - not just during exercise. And that I'm more aware of my posture. Things are changing and I'm pretty sure it's for the better.

So if you're a Brisbane local in need of rehab or strength and conditioning, I would heartily recommend Bodytrack. I'm really confident that I'll be toeing the line in Melbourne in better shape than I've ever been and without fear of another ITB flare-up.