We Can Do Hard Stuff

I have heard a little voice in my head over and over again in the last couple of months telling me one thing.

"It's just too hard, you might as well give up."

Ever since I decided to embark on my little business venture that nay-sayer has been very vocal. And for pretty good reason. I'm a sewer/baker/mother/blogger/qualified-vet-who-hasn't-practiced-in-decades. I am NOT tech-savvy. Not, not, never, never, don't be ridiculous.

But there seemed to be such a good business opportunity. People really seemed to like my loud, fun tights. And people kept urging me to do it. I was told it wasn't that hard to do. I'd have no trouble at all. Hang on - that's how I signed up for my first marathon.

So I jumped in to the deep end without testing to see if there were any roots, rocks or crocodiles. That's the best way to learn to swim isn't it??? So it must be the best way to develop a cottage industry that one day will take over the global activewear industry. Are you quaking in your boots Lorna Jane?

But I'd kind of put it out there that I was going to do it and I didn't want to say that I'd given up because it all seemed too hard and I was too old and lazy to be bothered with learning all this new stuff. So I started making notes. Lots of notes. Lists of things that had to happen. Things I had to write. Information that was needed. And then I set about trying to do a little bit towards it every day. Just one thing ticked off a list that seemed to grow exponentially the more I investigated.

Every day that voice kept reminding me that it was too hard and I could just give up. And every day I'd have to tell that voice to shut up. I'd remind it that I was reasonably intelligent and incredibly stubborn and that combo seems to work well when it comes to getting stuff done. Then I'd complain about how hard it was and how inept I was to my family and my friends and they'd all tell me that I could do it so I pulled up my big girl panties and plodded onwards.

And I've discovered something along the way. Just because I'm not tech-savvy doesn't mean that I can't do techy stuff. I don't actually have to understand it to use it. Kind of like my car - I've been driving for decades but I can't tell you how it worked. There are people out there who know how it works and who've made things so virtual idiots (I'm talking idiots in the virtual realm - not someone who has an IQ of between 0 and 25), like me, can do computery stuffs. And when I couldn't just figure out how to get things the way I was wanting there were people out there in cyberspace who could sort it out for me, or point me in the right direction to get it sorted. If you don't know how to do something then ask someone who does. But if it's a computer geek you're asking you might have to get them to really dumb it down so you can actually understand what they're explaining.

The doubts about whether I could do it weren't my only ones. I also doubted whether there'd be a market for more tights in an already-flooded activewear industry. A friend let me put some in her sports shop (Sportsfirst at Toombul if you're a Brisbanite looking for fun, funky tights - thanks so much Judy and Phil) and they've been selling. Judy has also been a font of knowledge about lots of business stuff and has been so open and available for answering my questions - which are possibly quite stupid but I figure if I don't ask I'll never learn.

My middle son, Josh, got to hear a lot of my doubts and fears and he had sage advice. "The worst that can happen is that you lose a bit of money. And in the meanwhile you've learnt a lot of stuff and you're having fun. And learning new stuff at your age is supposed to stop dementia." And he's right.

So now I'm almost there. I'm on the threshold of publishing my website and it's getting kind of exciting. There's just a little bit more tweaking to do (not twerking Jim, Definitely not twerking!), some editing, sorting out the payments side of things and lots of proof-reading (cause heaven forbid that there be any spelling or grammatical errors). I'm hoping that it'll be up and running by Monday when I officially start back at work. 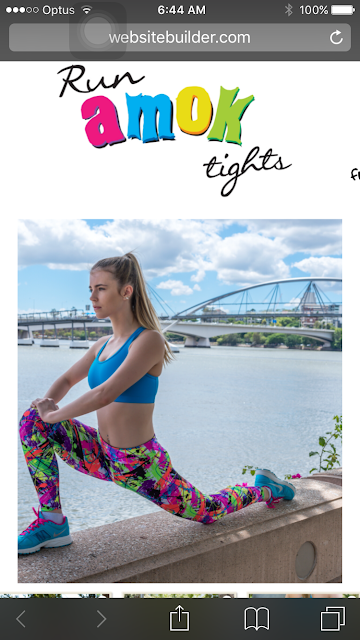 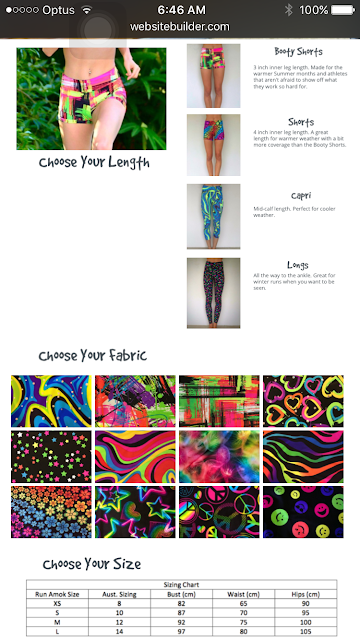 The moral of this post isn't to say how great I am. Or to advertise my new line of tights which are 'fun for your run'. It's just to say that we can all do hard stuff. We can all learn something new - even at my age. The trick is to keep moving forward just a little bit every day and to never give up even when the finish line seems so far away. Just a little thing that running taught me that works in so many different areas of life.