I realised something important in the last week. Having no marketing plan for my business really works. And by 'works' I mean that I was getting none. No marketing = no work. Well, not exactly none - but certainly not very much and definitely not as much as I thought I'd get.

When I decided to start selling my tights it was because I kept getting comments on what I was wearing. A couple of people ordered some and they got great reactions when they wore theirs too. So I thought that all I had to do was build a website and that would be it. Orders would flood in and I'd be scrambling to keep up.

Stop laughing. Especially if you've had babies and understand the 3-sneeze rule. It applies to out-of-control laughter too. Three seconds of hilarity can spell disaster.

Okay I was naive. But I've watched Field of Dreams. I built it so they would come. Because I had a unique product.

Again stop laughing. I actually do know that there are millions of labels that make tights. So many, many, many people decide that they can be the next Lorna Jane and live happily ever after - except when the media is hounding you about your discriminatory hiring practises or not paying your models money.

Last Monday I woke up feeling really flat about work. I'd made a mistake. I'd spent money recklessly on an ego-project. Who was I kidding in pretending I could be a business woman? I don't know a thing about what I'm doing - apart from the making tights part. I'm pretty damned good at that.

Yeah, I was having a real pity-party. And this pity party continued until I had a messenger conversation with a friend. She's very knowledgeable about marketing and told me that I needed to sit down with a coffee and think about my contacts and use them. Talk to them about my product and try to get them involved in spreading the word.

I did actually know all of this but I just hate asking for help. It's how I was brought up. Don't ask - wait until something's offered to you. Be polite. Don't get into people's faces. All that kind of stuff that is fine in a social sense but doesn't work in the business world.

So I pulled up my big girl panties. I rang a couple of people. I messaged a couple more.No one told me to get lost. That I was being a pest. That my product was crap. I got a great response. And I went from feeling like I'd made a big mistake to feeling like the mistake I'd made was not pulling my finger out and start pushing my product earlier.

I finished the week with a big shot in the arm when Iven reported back from parkrun with the news that three people were wearing my tights. I know that's hardly worth writing home about but for me it's big.

Then I saw my friend Clare had worn her new pair and had run a new PB and course record at another parkrun. Who'd have thought that cupcakes would make you fast?! 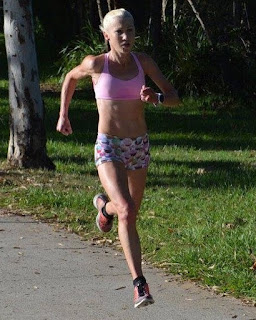 Not exactly world domination. But it's a start.
Posted by Char at 1:59 PM