It's probably a strange list to have in a phone but if I had it on a piece of paper and put the paper somewhere safe I'd probably forget where I put it. Because, yep memory is an issue at my age.  And the whole reason that I want a list of races that I've run is because of my memory. I don't want to forget any of them. Not a single one. 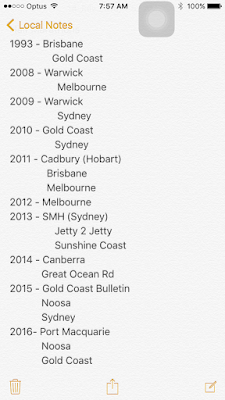 I've done 23 now. Not a huge number in the scheme of things but not a small number either. And, considering number 2 was going to be my last ever, quite a big number really.

Number 2 was going to be my last because it was awful. Horrible. Painful. Miserable. And disappointing. And it wasn't like I hadn't trained hard for it. I'd done nearly all of the training sessions I'd been set. I'd battled through a case of ITBS and come through. And I'd run a pretty okay-for-a-newbie-runner half a few months before. That one I'd finished in 2:01 and I knew I could run under 2 hours. In fact I was so determined that I put too much pressure on myself and totally fell apart on the morning of the race. Spent a lot of time in the bathroom throwing up and barely made the start line. In fact the thing that got me to the start line was the fact that I'd paid for the race and money was tight back then so I didn't want to waste it. I ran 10k of the race then had to walk most of the rest of the way. Pride and getting the t shirt and medal I'd paid for were the only things that kept me going.

That race is still my PW time - 2:20. And I swore I would never do another. Not under any circumstances. Ever!

I have my next half in just a couple of weeks. And then I'm really not certain about the rest of my racing year. I've signed up for Sydney marathon in September but I'm tossing up with dropping back to the half for a couple of reasons. I've got a minor toe issue. A tendinopathy of the
extensor-something-or-other-scientificky-sounding of my big toe. I don't think running's making it worse but it's not making it better and I'm not quite sure how it'll hold up to the stupid long runs ahead.

And then there's the whole sub 1:40 thing that didn't happen at the Gold Coast. I don't think I'll get it in the Brisbane half because it's a hillier course than Gold Coast and I truly suck at hills. Sydney is supposed to be flatter this year and I've run some good times there on the old, slightly hilly course in the past. And then, if I don't hit the time in Sydney there's always Melbourne a month later. And Melbourne is a pretty flat course. I'm not the fastest recoverer from marathons in the world so there's no way I could attempt a pb if I ran the Sydney full.

So I have a quandary. And I'm vacillating on the best option. And I really should decide sooner rather than later. What would you do? 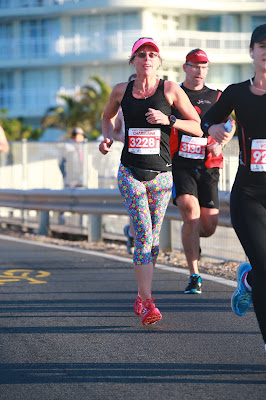