You thought the toilet blogs would be over the moment the new loo was in place didn't you. Well you were wrong!

When last I left you gentle readers the toilet had just been installed and we had been ordered from perching on it until 24 hours had passed. That meant that every single person in this house used it before I did. Sometimes I envy the ability to pee standing up. I did a lot of stair-climbing/running (depending on the urgency) that day. By midday the next day the 24 hr curfew had passed and I received this text from Luke, my youngest (who is too lazy to walk downstairs to the workroom to ask in person ... or even to change out of his pyjamas) 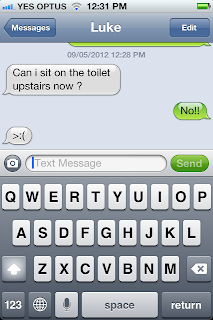 And the reason I said no - so I could race upstairs and be the first to use it. The look on his face was priceless as I shut the toilet door. But, hey, I'd called dibs and I'm not beneath using my maternal power to get what I deserve.

I've found that there's a bit of a problem with our toilet - in fact with all toilets on the market. They are all lower than our old toilet. That's not an issue for me but when the rest of the family consists of freakishly tall males it can become an issue. A lower toilet means that more precise aiming is required and SOMEONE in my family is directionally impaired. I do think that a lot of the problem has to do with liquid at a high pressure being forced out a small hole causing a bigger spray area and the further the source of the spray is away from the final resting place, the wider the splatter zone.

So my solution to this is a genius invention - I think all toilets should be fitted on hydraulic platforms that are linked via computer to an infra-red sensor at the door. The sensor detects the height of the incoming user and immediately adjusts the platform height to make the toilet seat splatter-proof. We'd have t work out a way of making all the plumbing fittings adjustable as well - minor problem, I'm sure.

Or alternatively I could make my posse of males sit when they wee. Works for me!

The non-human male of the house has been giving me some problems too. Toilet training - what toilet training?!! He's good if I manage to get him outside on a regular schedule but hasn't worked out that he can take himself out. And he's had a little bit of diarrhoea - not fun!!

And then there's the mischief that he's full of. Below is a box of rubber that I use for my leotards. And a sleeping Toby who wasn't actually sleeping - just resting his eyes till I left the room. 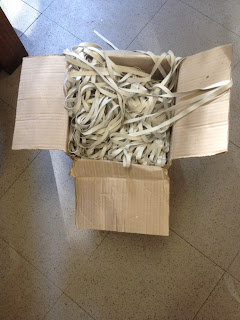 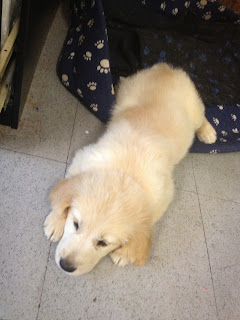 And this is what I came back to. 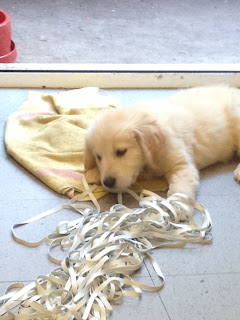 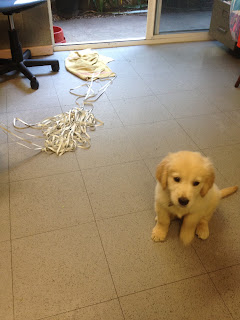 I had a surprise day off from work today. The surprise was that I managed to get my work done more efficiently than I'd expected. So what do I do on my day off? Try a new recipe of course. This one's a Nutella Cupcake that I found on Pinterest. I've been watching Masterchef and feeling inspired and creative so I just had to give them a go.

The hosts on Masterchef are adamant that tasting is fundamental in becoming a great cook. I want to become a good cook so I did what was recommended. They probably don't actually mean for me to taste the nutella. And probably the fourth heaped teaspoon was overkill. And I probably didn't have to taste the frosting every time some squirted out the back of the piping bag onto my hand. But I must be becoming a good cook because it tasted awesome every single time. Man, I feel sick!! 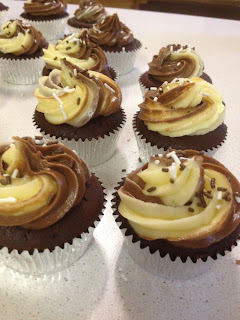 It's just as well it's long run day tomorrow.

And for all of you who read my last post and were wondering how my son was going after the assault, I'm happy to report that everything is healing nicely and he seems to be doing well.