"I want to run four times a week, strength train twice and throw in some yoga at least three times a week. With my running I'd like to get my mileage back up around the 50-55k per week"

I just checked back to my New Year's post for this year and that's the only real hint of a resolution that I made for the last year. And how did I go. Major, epic FAIL! But it was because of circumstances beyond my control and I'm at peace with it. My main aim of 2012 was to find out what the hell was wrong with me and I finally found it so I'll count 2012 as a success - albeit a pretty torrid and traumatic one.

The year started for me with another bout of exhaustion with no apparent cause. A diagnosis of post-viral fatigue meant resting as much as possible. I spent the days wondering if I'd be able to survive the day without a nap or two, worrying whether I could get through all the work that had to be done for my business and at home. I tried alternative therapies to try to up my energy levels and whenever I could I'd try to continue an exercise program that was so itiful compared to what I'd been doing before.

For weeks I couldn't run - so I'd walk. And then I did a mix of run/walk. And I gradually built back up to be able to run the 10k at the Gold Coast marathon festival in July. It may have been my slowest time ever but I ran the whole way and I was thrilled. And then I set my sights on the half marathon in October and again managed to finish, slowly but surely. I've finished the year with 1650k on my Garmin which is much better than I would have dreamed at the beginning of the year.

It's been a tough year for someone who likes to set goals. How can you set goals if you don't know if you're going to be well enough to do anything. I went into both of my races with contingency plans. If I couldn't run the whole way I'd walk. And if I was too tired I'd just use the weekend as a holiday. It's not a terribly satisfying way to do things but beggars can't be choosers and just being there had to be enough for me.

But I've learnt heaps about myself this year.

I've learnt that I'm a dreadful patient. I get terribly frustrated to not be able to do the things I took for granted before. I also hate to ask for help and I've had to do that A LOT this year. But I've learnt that people don't resent you for having to help out.

I've found out that I have some amazing friends. People who will drive for an hour to let you know that they care how bad you feel that you've had to put your dog down. People who turn up with flowers when you're worried about your son. People who listen to your tales of woe and keep coming back for more. People who live miles away and send you such uplifting, caring texts that it brings tears to your eyes and gives you the strength to carry on one more day. People who know you're in a cranky mood but still offer to meet you for coffee even though you frighten them when you're cranky (yes, I mean you Coach Chris). All these wonderful people have been my props when the going has been tough and my knees have felt like they've been buckling under me. I am so incredibly blessed. 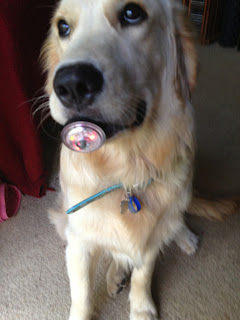 How can you keep a straight face when this is what greets you at the door, lights flashing? 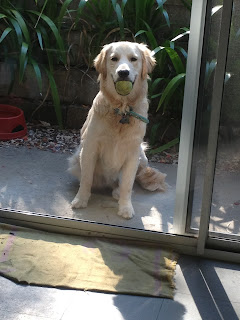 And how can you not take a tennis-ball-throwing break from work when you see this face?

It's not been all bad having to take life at a slower pace. You get a bit more time to see the treasures that are hidden if you rush on by. 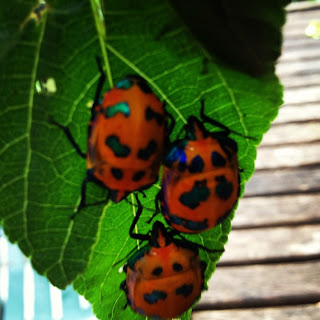 I'm really looking forward to 2013. It's going to be nice to turn over the page and have a nice fresh one to start writing on.