After a big weekend like the one I just had, it's hard to know exactly where to start so I'll start at the beginning.

Saturday morning I woke up hours before my alarm was meant to go off. It had started already. My heart was racing and there were cold fingers of anxiety wrapping themselves around my intestines and squeezing. My brain was working in over-drive trying to keep everything together. It was amazing that Iven could sleep with all the noise that was happening inside my head. I was fighting a losing battle and when I finally admitted this I took a little white pill and managed to get a few more fitful hours.

The internal battle started up again the moment my alarm went off. This time I didn't try to fight it. I just took the pill and got myself ready. I was so pissed off and disappointed with myself. I know in my head that I can sit on a plane for an hour and a half and I can spend a couple of days relaxing and sight-seeing and catching up with friends and I can run 21.1k. But somehow this message gets lost between my brain and my adrenals and these waves of helplessness take over and I'm rendered almost comatose.

Iven got me to the airport and just knew that the best course of action was to walk me in and sit with me until I had to get on the plane. We were pretty early so I talked to the flight attendants at my gate and told them I was a nervous traveller and would it be possible to board the plane early? They were so lovely and reassuring. They said to just come up when they asked for passengers that needed assistance boarding. A little ironic that I need assistance to board yet I'm running a half marathon the next day.

The flight was over in the blink of an eye - mainly because I slept pretty much the entire way. One side benefit of those little white pills. And when we arrived the anxiety had settled and I felt blissfully normal. Actually, I felt a little excited because I was about to spend the rest of the day with one of the nicest people I know. KD was picking Elio and I up from the airport and I was going to have a one-on-one sight-seeing tour of Canberra for the most of the day.

But once she dropped me back at the hotel, those little flutters of nerves started up again. All I had to do was meet up with my friends to go to dinner. It shouldn't have been hard but tell that to my cortisol-secreting organs. Another white pill - but it was either that or eat no dinner at all and that's never a good idea before a half marathon. 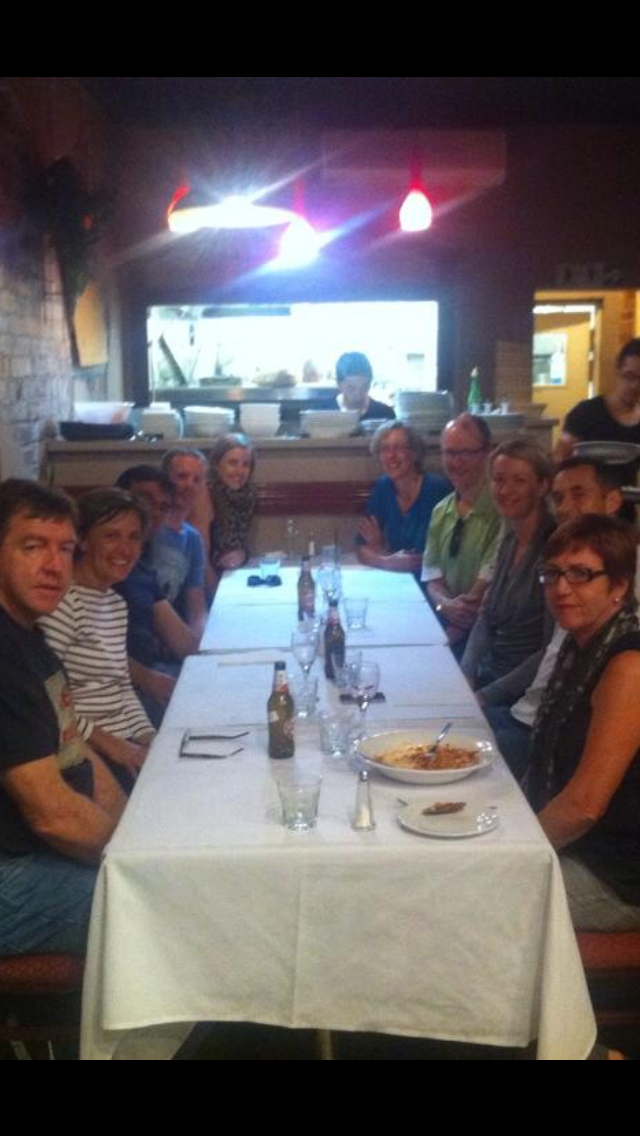 Sunday morning came too soon. It was about 2:00am when my anxiety head woke me up. Ughh! Four hours until my alarm was supposed to go off. Four hours of my head skittering around like slaters under an upturned rock. I wasn't going to make it to the start line if I couldn't settle down. Another white pill and I slept till the alarm woke me up. Then it was just a matter of forcing a banana down, dealing with things that need to be dealt with (yes, I do mean the toilet), getting dressed and meeting everyone down in front of the hotel. I'm pretty sure I totally had them fooled that I was calm. Or maybe not.

The morning was perfect. Blue skies but cool. The start area wasn't crowded and we found the rest of the group for a pre-race photo. 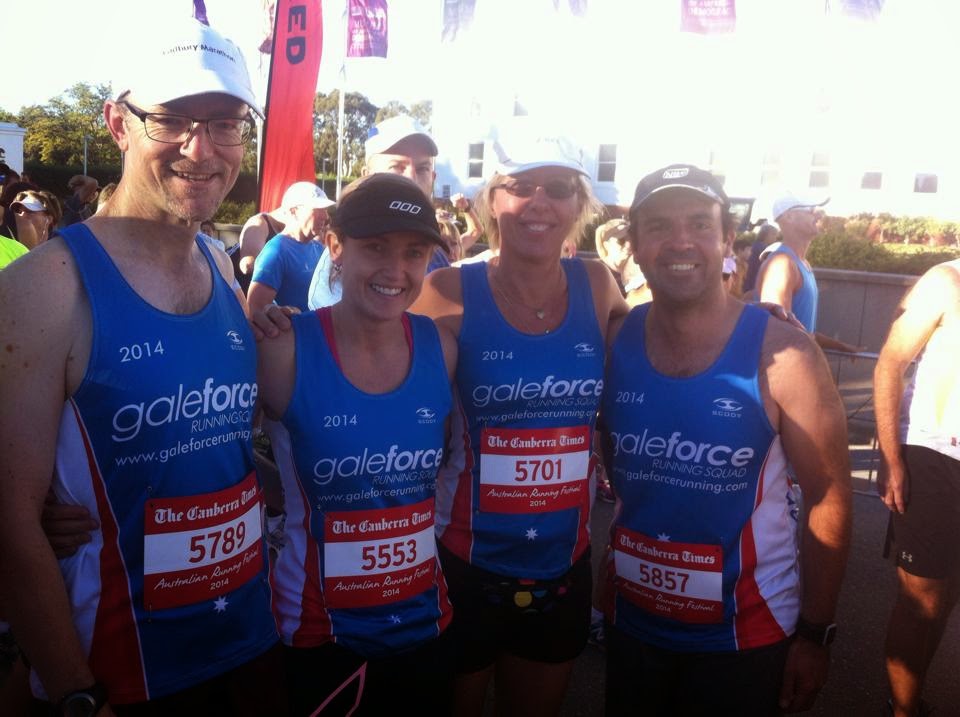 For the first time ever I didn't have to hit the porta-loos. And that's not necessarily a good thing. A short walk up to the start. A little wait and then we were off. 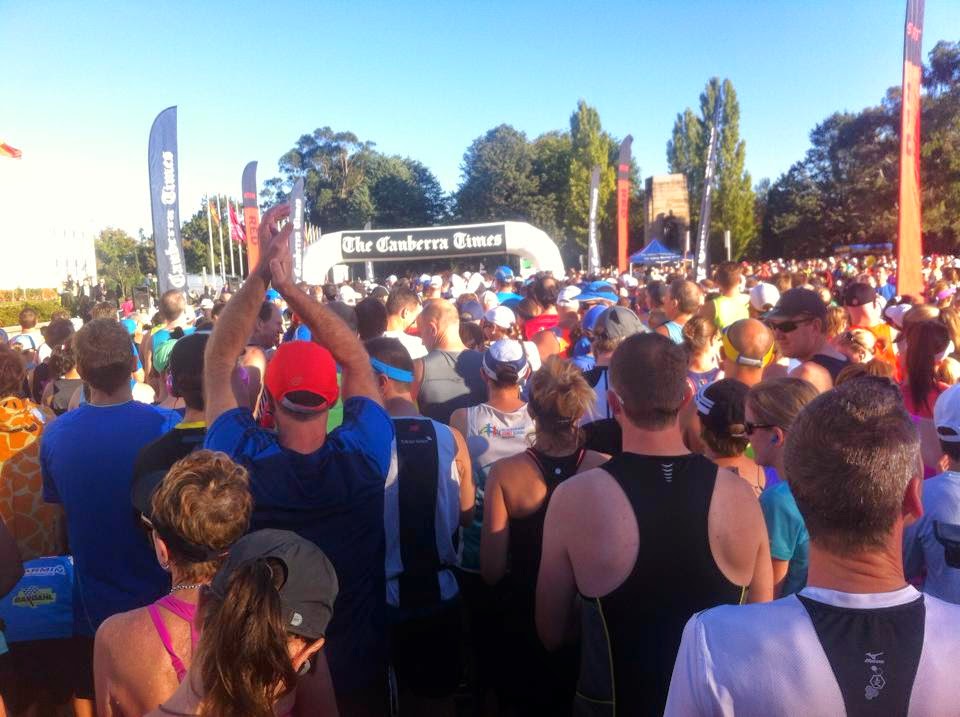 The goal for the first kilometre was to keep it easy. Hard to do when it's mostly uphill. My legs didn't feel great - a little bit jelly-like and that's not because I've started to celebrate Easter early. Too much adrenalin and cortisol and too much mental energy spent just getting to the start line. I told myself that they'd warm up. That I'd work my was into the run. That I could only do what I could do on the day and that would be enough.

And they did improve. A little. By kilometre 6 they were starting to feel okay. That lasted till about kilometre 11. And that's when the mental games really began. Try to stay focussed. Run the kilometre you're in. Look for your friends on the out and back sections. Distract yourself with the views - the lake, the autumn leaves, the spectators. Breathe in the smells and the crisp fresh air - but do it quickly because you're working really hard.

The hills just kept coming. They were never steep. Just long and slow and relentless. The uphill kilometres dropped my pace to around 5:20 and the downhills seemed to be consistently around 5:08 except for the spectacular 4:54 which was probably an error of judgement.

Every kilometre that ticked over was internally cheered - another one down where I didn't walk. I told myself that if Trudy (a friend who was just behind me) caught me I could walk some of the uphills. But the competitive part of me was damned if I was going to let that happen so I slogged onwards.

And then finally we were into the last kilometre. I saw KD on the side of the road and that gave me a huge lift. I high-fived the kids lining the streets with their hands out and their smiles made me smile. Someone yelled that we only had 500 to go so it was time to sprint. Yep, that wasn't going to happen. And then it was all over. Hooray!!

The group assembled for a post-race pic and to share war-stories. Elio and Ian ran PBs. Congratulations to both of them. Most of us found the hills challenging. But we all finished with a smile on our face.

Today I'm a little stiff and sore but satisfied with my 1:50:52 finish time. 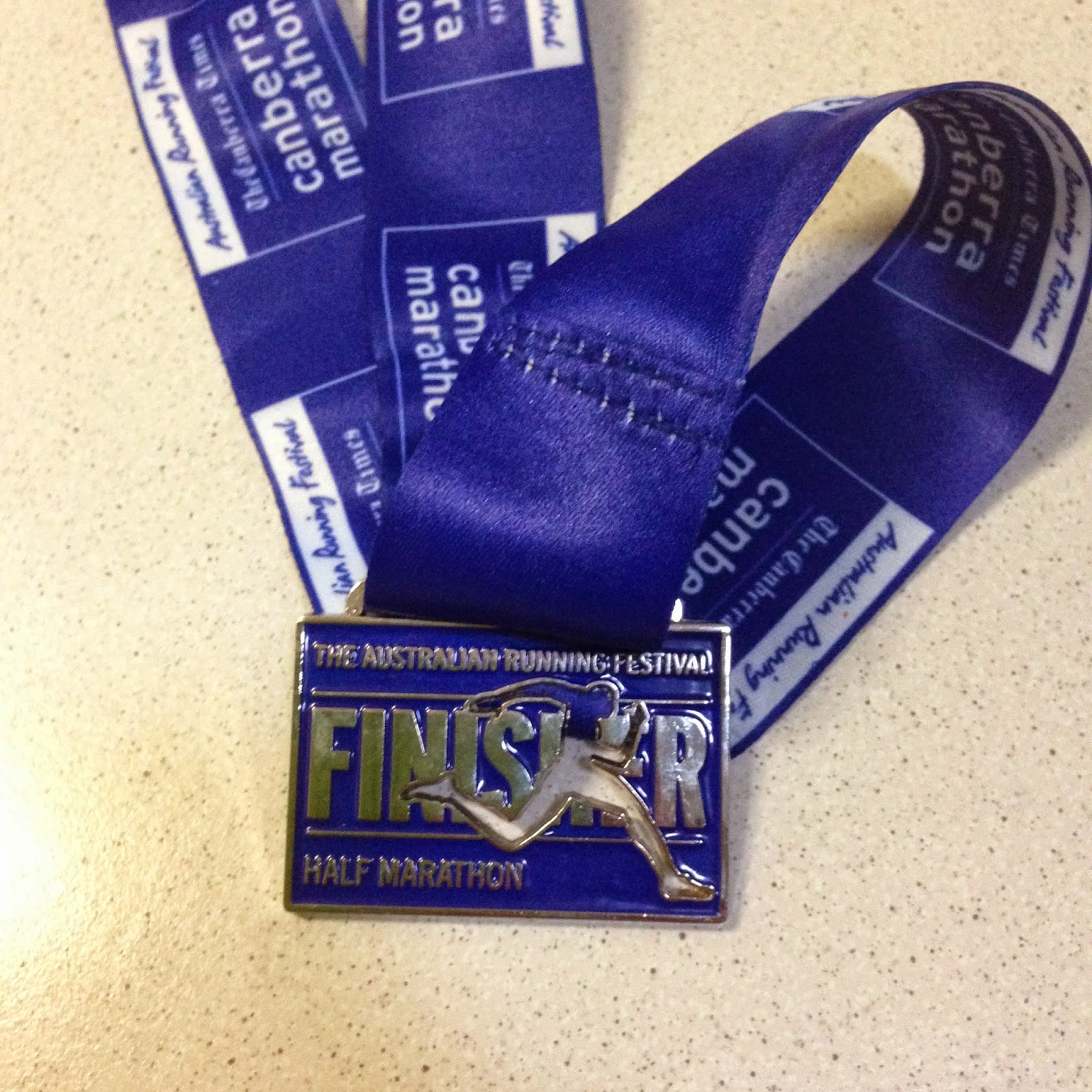 My first race of the year is usually the worst as far as anxiety goes so I'm expecting my next will  be a lot calmer. At least I hope it will be.