I did something last week that I should have done two months ago.

Everyone else was doing it two months ago so from that you can guess that I'm either lazy, unwilling to bow to peer pressure OR a procrastinator. And you'd be right on all three counts.

This 'something' that I did last week was to pencil in a few dates on my race calendar. Yeah, I know that every other serious runner out there does this on the 31st of December - a New Year's List of potential PBs, fun and pain (for runners fun and pain are kind of the same thing). I can never get my arse in gear that early. I need to read magazines and pour over the pretty pictures of scenic courses, ponder the ebb and flow of my work year and how the exhaustion of marathon training will mesh with aerobic competition deadlines and bodybuilding competitions. And before I know it, it's almost March and I'm pretty much the only person in the squad who hasn't submitted a plan to Coach Chris. Again. I guess he's used to my inability to decide by now.

I did pick my Big One a month or so back. Gold Coast marathon in July. Less than 19 weeks away now according to the email that the organisers sent last week. Personally I think they're starting their countdown a bit far out but who am I to judge?! And I did enter a 5k (coming up this Sunday) just to have breakfast with friends. But Coach Chris also likes us to do a couple of lead-up races to the Big One and it was those that I was having issues with.

So after careful consideration I have picked two half marathons. And by careful I mean the dates fitted okay and I they're close by so I don't have to do other stuff that would require decision making like booking flights and interstate accommodation and asking Iven if he wanted to make a long weekend of it and what else will we do while we're there?

So I'll be running the Gold Coast Bulletin half marathon on the twenty-somethingth of April and then the Noosa Half Marathon on the twenty-somethingth of May. Both are double loop courses but having done one of these I can say I really don't mind them. My memory is a lot like a goldfish when I run so by the time I'm running the second loop I've forgotten what the first was like and it's like running somewhere that I've never run before.

And not only have I decided on my first half of the year, I've done something a little rash and wild. I've pencilled in a second marathon at the end of the year.

What??? Me, Mrs Over-cautious, Over-thinker doing two marathons in a three month period? Slightly out of character, I know. But I have run it past the coach and he's confident. And I do have an out - I can drop back to the half if I'm not recovering well enough from the July marathon. So it's not so wild and rash as I like to pretend. Leopards (or dalmatians) never really change their spots.

And speaking of dalmatians, we've found out that ours likes fresh meat. I know that all dogs like meat and so of course fresh meat would be something delicious in their eyes but when I say fresh meat in this case, I mean meat that was running around only a few seconds before and meat that still has its feathers and beak and feet attached.

Yes our little Ricky caught and killed his first scrub turkey the other day. Admittedly it was a baby scrub turkey but he has the taste for them now. I didn't know whether to be proud or horrified when I saw him, feathers and dangly legs hanging out of his mouth.

This is the face of a killer. 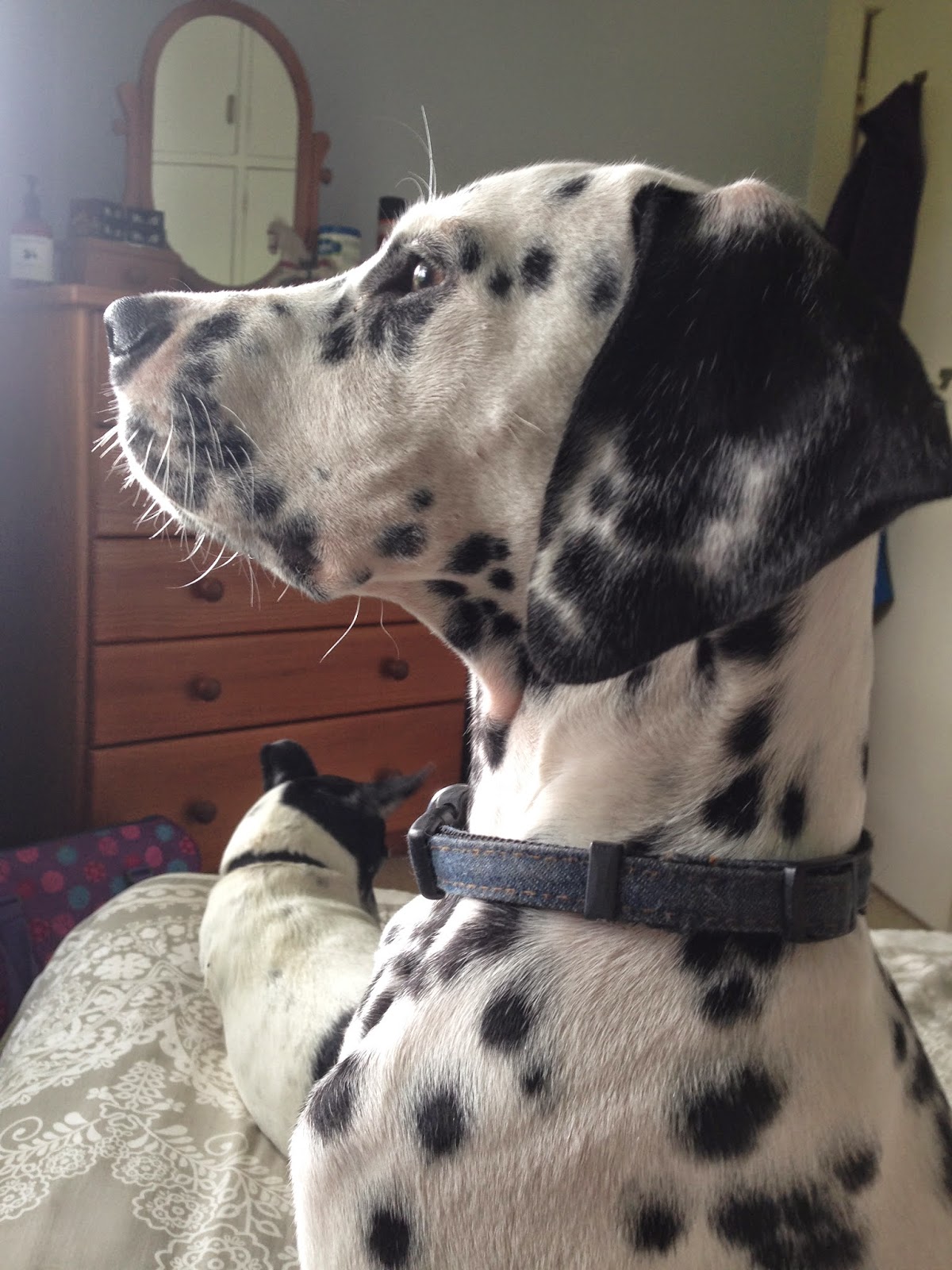