It's that time! Finally!! 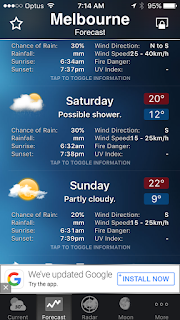 Less than a week to go and there's a reasonably high probability that the weather forecast will be close to not being totally wrong.

Checking it was the first thing I did this morning.

Well, not the first. The first would have been to check the clock and see that I could sleep in another hour. Then I made the bed. Went to the loo while patting three dogs simultaneously (winning at multi-tasking). Accepted the gift of a scraggly, chewed up and de-stuffed bunny. Ran the canine gauntlet into the kitchen without being knocked over (winning at early-morning agility testing). Unpacked the dishwasher. Made breakfast. Read emails while eating breakfast. Checked FaceBook. Realised that the mince that I'd left defrosting might potentially be filled with E Coli or Salmonella but I'm sure it'll be fine if I stick it in the fridge and thoroughly cook it. And then I checked the weather so it's just about the first thing I did.

And what I saw made me happy. All I ever ask for is a start temperature in the single digits and it looks like I'm going to get what I want. It's almost enough to make me say that I don't want any Christmas presents because I've already had mine. But I won't say that because I'll have forgotten about this early gift by the 25th of December. And I do like to see Iven sweat about what he's going to get me every year. The terror on his face when he heads to the shop - now that's the joy of Christmas!

We had our last 'long' run on Saturday. Followed by the obligatory photo shoot where someone (and I won't mention any names) forgot the dress code. 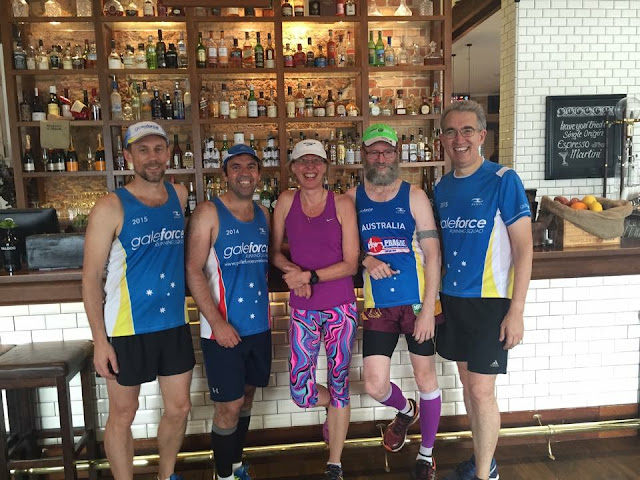 This is my band of brothers. My posse. The boys who've had my back on the long training runs for the last umpteen weeks. And I wanted to introduce them to you all. From the left there's Crackers, The Hollowman, Moi, Mr Beard of Awesomeness and the Mathemagician. They're good men to have in a crisis. Like encouraging you to get out of bed for a 37k run that you're really not keen on running. Or finding a key to a locked toilet. Or working out just how much further we have to run to our turnaround.

I've repaid their support by providing tissues for failed snot rockets and for bringing up the sartorial standards in the group.

They've all trained really hard and, if everything goes well on the day, should bring home some great results.

It was kind of weird not spending the rest of the weekend exhausted after the long run. I actually had energy and I didn't want to cry when I was faced by a flight of steps. I guess that means the taper is working. It also means that I had the energy to experiment in the kitchen.

I learned an interesting fact in my experimentation. Warm caramel oozes. Therefore it's important to let the caramel set in the fridge before decorating the top. 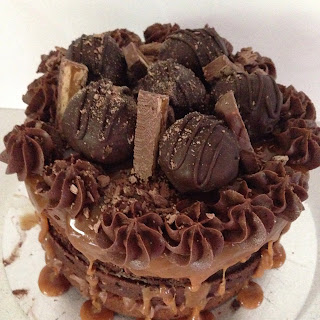