Three runs this week. Just three runs but they've been three glimmers of light in my running wilderness. Tuesday's speed session was slow but I recovered well. Thursday's 8k - also slow but recovered well again. This morning it was a 10ker and, running with the group, was probably a little too fast. My average HR was up to 170 (Wednesday's was 160). I averaged 5:45 per k and I should be shooting for 6. But, good news - I'm feeling pretty good and being that it's Saturday I get to have and afternoon nap. Yay!

Even though it was a little fast, I love the social side of running with the group. I love catching up with what everyone's up to, saying hello to acquaintances that we run past and even running into old friends. Today I ran into Louise. Louise and I have spent many hours together on the side of soccer pitches around Brisbane but now the boys are older we don't catch up that often. It was so nice to catch up. This is one of the little gifts that running gives me.

I'm starting to look forward to next weekend's relay. It's going to be a long, tiring three days and it's likely to be hot but there's no other event like it. We're not competitive but everyone gives it their best shot and there's nothing that bonds the group as close as acting sentry for each other when we use the bush toilet. Plus the weekend raises heaps of money for the Endeavour Foundation to help kids and adults with Cerebral Palsy. Fun, fun, fun! 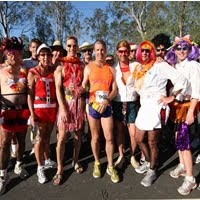