Three Days in an Oven 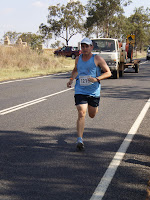 I survived! I've just endured the hardest, hottest weekend of running that I'll (hopefully) ever do. Runners are the most insane bunch. Over 300 of them turned up pre-dawn on Friday morning to spend the next three days racing over 500k. I woke up at 2am (after only 4 hours of very fitful sleep) and was at Coach Chris's house by half past. We packed the bus and were on our way by 3. The starting line was Beenleigh Football Grounds and I was number one runner for our team. The gun went off at 5:45 and we were on our way.

Most teams had put on their gun runners which meant that I was left eating dust. My plan was to be conservative but, as usual, my competitive spirit got the better of me and soon I was passing runners - not many, mind you, but more than one. I finished my leg in 4:45 pace fairly pleased with the run but worried that I may have made a mistake in going too hard. Then I realised that I couldn't see the pick-up car and my worry changed to whether I'd been forgotten. Twenty minutes later the car arrived and I could get some water but some damage had been done. I've been having some problem regulating blood sugar levels and need some high GI food really soon after finishing exercise so the delay meant a BSL dip and I started to feel really sick. Three mouthfuls of cereal and I was heaving into the bushes. Yuk!

The nausea stayed for a few hours and I was seriously wishing that I'd stayed in bed. And seriously wishing that there was no such thing as over-training syndrome. But it passed and I started to enjoy the company of the team. We were unlucky to have the most horrendously hot weekend that the 500k Challenge has ever seen but lucky to have an airconditioned bus. Incredibly no-one was seriously affected by the heat although a few did collapse at the end of their relay legs. I think the tireless work of the watering crews kept everyone in one piece.

My runs did slow through the event. I had been given 5 but Chris knew I was struggling and swapped me down to 4. The last was at 1:30 pm in over 35 degree (Celsius) heat so it was a real endurance event. I could only manage 5:30 pace but I survived and didn't throw up at the end!
The funny thing though is that I had a fantastic weekend. Spent hours with amazingly positive people and laughed till I was almost crying. I'd definitely do it all again - but next time I'll be praying for cooler weather. 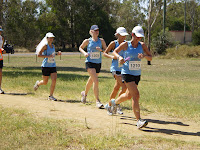