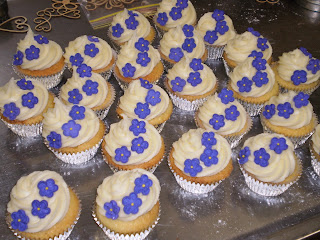 What a huge weekend! It was the first engagement for the next generation. Nicole and Nick finally decided to bite the bullet and formalise their long-standing relationship. So the family did what it does best - cook and decorate.

Mum was in charge of the floral arrangements and I was in charge of the cupcake tower. Older sister Julie was my hugely-capable sidekick and together we whipped up 101 cupcakes. We did chocolate mud, lemon sour cream, white chocolate and vanilla. Then we had to decorate. It was 5 hours worth of exhausting - but it was fun and we were both pleased with the end result. The party went off well too.

I didn't run all weekend. I have a huge dose of the guilts which I have to quash and let go of. The 500k Relay is on in less than a fortnight and I need to be feeling on top of things by then. I have only 3 runs scheduled for this week and need to be ultra-conservative especially at speed tomorrow. Coach Chris has been told to be on my back about going slow - seems so wrong for a speed session.

And on the home front we're in full exam mode. Josh has only one to go to finish his 3rd year in electrical engineering. Sam starts on Wed but will be finished his degree (human movements/exercise physiology) in less than a fortnight and Luke will start next Monday. There will be neurons firing all over the house! 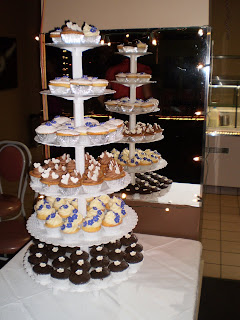