Yeah, I know that having the flu is going to have and impact on my fitness. But, seriously, did Saturday's run have to hurt that bad? Okay I was not expecting that much from the run and I know I was less than a week from being flattened with fevers but I was kind of hoping that I'd paid enough penalties for the year.

My plan for Saturday's run was to take it easy. Just a nice and slow 10 to 12k depending on how I was feeling. The slow part meant in the 6+ minute range per k. And it was around there for the first two and then, somehow the plan disintegrated. I blame it on winter and the fact that it was still dark and I couldn't read my Garmin. One minute I was running along feeling nice and relaxed and the next I was sounding like a crazed stalker, heavy breathing down the phone line.

"It's because I've had the flu" were my first thoughts. The crazed part of the crazed stalker phrase wasn't so far wrong. My first thoughts should have been - "I've been sick up till just a couple of days ago. I'm not at 100% and this is hurting a little so I should slow way down." That's what any rational, sane person would have thought. I, clearly, am not one of them. When I finally saw  my pace at around the 4k mark and it was down in the mid-5:00 zone, I got kind of excited. My thoughts went something like this - "You were truly, horribly sick for most of a week. Bed-ridden for 3 days (apart from the drugged-up shopping expedition). And still you can crank out a reasonable pace. You are a machine! You can keep this going for miles."

Yes I am obviously deluded/manic/crazed. And I have issues with blending imperial and metric distances. (I also have issues when it comes from knowing left from right when I give directions but that's not exactly relevant here. AND I also have issues staying on topic.)

Luckily I was holding on to one small rational thought that told me that 12k would be enough on my first real run post-infection. I reached the turn-around point, had a drink and all the bravado that was telling me how awesomely I was running drained out. I promised myself that the return trip would be much more moderate in pace. But that thought didn't quite reach my legs they were on a roll and weren't prepared to compromise. Four of the last six kilometres was run in the 5:40 zone. Boy, was I relieved when I finally saw our finishing point.

So I promised myself that I wouldn't even attempt to run my usual Sunday run. That too was a fail. One son MIA makes me a very anxious mother. And the best way to cope with anxiety is to go for a run. Again, it wasn't very pretty.

So for today's session I was uber-disciplined. A turtle had nothing on the pace that I ran my first three and a bit kilometres. I kept looking at my heart rate and slowed it down when it started to creep up. And when I joined the group doing 1k reps, I only did two!! The first was just over 5 mins and the second was just under and I had heaps of rest between them (for rest read chatting with fellow squad members and basically distracting them from doing their reps - my bad!)

And the son that was MIA turned up that afternoon of course. He was fine but his phone had run out of charge and he hadn't thought that his mother would be working herself into a state thinking that he was in a morgue/in a hospital/in jail (not sure why I would have thought this but when I get anxious all logic goes out the window).

But the up-side to all that angst was that I'd baked. Both because it was Sam's birthday and because baking is a known non-pharmaceutical calming agent. Really happy with the end result - a dense coffee cake filled with a dark chocolate ganache and iced with coffee buttercream. 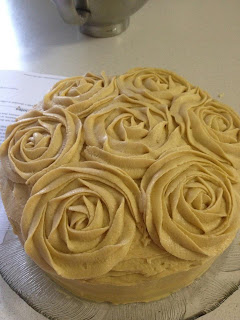