Three Things Thursday (got it right this time.)

Sometimes things are going well and sometimes God grabs a baseball bat and whacks you round the knees to get your attention.

I got whacked around the knees today. After my less-than-stellar run on Tuesday, I backed up with a fairly tired, heavy-legged 10k today. My heart rate stayed in a good zone so I'm not panicking yet but the rest of the day has been crap. Tired and nauseated. I think the message I'm supposed to take form it is that 54k is too much for me yet. Stop being greedy!!

Contributing to the tiredness is some sneaky television programming which saw my current favourite program being shown as a double episode. I didn't know it was a doubler until I was part-way through the second episode and too sucked in to go to bed. I don't do post-midnight bedtimes so well any more. Even if I have the time to sleep in the next day, I just can't physically do it any more. And the following night was Sam's soccer semi-final over the other side of the city. Another late night.

There's been some really personal stuff happening too. I'm not quite ready to share it yet but it's heavy and it sucks all the energy out of me.

But on a day that was not the best, I had one little glimmer of silver in the clouds. A new client wanted me to make some athletic gear for her. In a hurry. So I did and she came to try them on today.  She tried on her outfit and was so excited about how it looked and felt then told me that she'd had a crappy day and hadn't really wanted to come. I'd made her day. And her happiness made mine. And so did finding out that she'd brought her guinea pig for the ride. That's a first for me.

Self-pitying venting done. Now on to the real purpose of the post. I wanted to do a little expose of what really happens in the communal female showers after training. This is for all of you who've never been in one (which would be most males except for that footballer who couldn't read a few years ago.)

One of the squad and I regularly use the showers at the athletics track before heading off to breakfast. There's lots of laughter and chatting, and occasionally there's the wail of disappointment when one of us realises that we've left an important item at home. Deodorant's no biggie - one of us will usually have something. Underwear is a little more challenging. You can choose to re-wear the sweaties that you've just removed or to go commando. But when Bec left her shirt at home this week it took challenge to a whole new level. Bec works at the uni and couldn't exactly go to work without a shirt.

She put it on and then told me it was a bit like Single White Female - she's trying to gradually become me. She wants to be an almost-50 year old with three sons who won't leave home??! When I pointed that out she told me that she'd return the top asap. I guess she changed her mind.

And what would a post be without a gratuitous cute Toby photo. Yes, I will give him a cuddle from all of you. 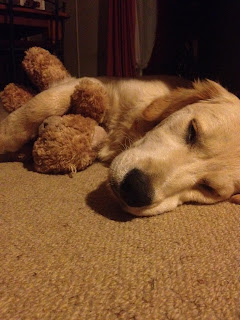