It's been a tough few days. The heavy personal stuff that I mentioned in the last post is still there and will be for some time yet and to be honest, I haven't been dealing with it that well. In fact, I've been dealing with it that poorly that I went to the doctor on Friday to get some help. Sometimes problems are just too big to deal with by ourselves and we need to reach out.

My doctor was wonderful. She listened empathetically and has suggested I see a psychologist to give me tools to deal with my anxiety because staying up all night and worrying isn't working so well for me. I know that there are some people out there who think there is a stigma attached to seeing a mental health professional but I am not one of them. I actually think it's crazy to struggle on with a problem when there's someone who can help bear the load.

So after I saw the doctor I had the best sleep I'd had in days just in time for Saturday's long run. I was a little worried about how I'd go on the run. I knew where we were supposed to be going and knew that it was really hilly so I opted to go my own flat way even though I'd be doing it by myself. But I'd only had one good night's sleep in four and hadn't been eating very well on Friday so I needed to allow myself to walk if I found the going tough.

And surprisingly, I didn't find the going too tough. I kept my pace nice and relaxed. Kept my heart rate slow. And lost myself in the beauty of the river and the rising sun. And I managed to distract myself from my worries whenever they crept in. What I'd planned as a 12k run/walk became a 15k run. Magic sometimes happens in the early hours of the day.

After the run I hung around a little longer to have a coffee and a chat with the squad. BEST DECISION OF THE WEEKEND. I got to download a little to one of the world's best listeners and just got to feel normal for a while.

My normal M.O. when I'm worried is to suck inwards. To hide away into a cave that I've dug for myself and sit there and let the worries fester until I make myself physically ill. Spending time with people is actually a way better management plan. And that's what I did a few times over the weekend.

I also baked. Because baking keeps my mind and hands occupied. 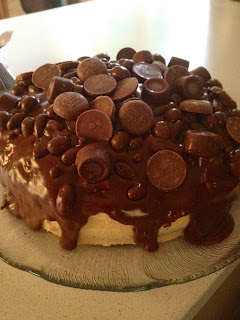 Caramel Mud Cake with the works.

The caramel mud cake was covered in a caramel butter cream. Then I drizzled milk chocolate ganache over the top and threw on lots of chocolates. It didn't quite turn out how I'd planned but next time I'll refrigerate the cake after I've put on the butter cream so the ganache doesn't ooze quite so far. 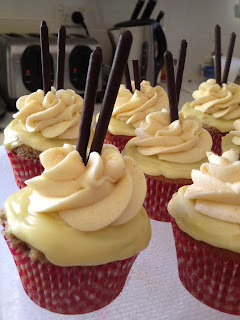 The banana cupcakes were originally a couple of nasty black bananas in my fridge. I covered them with a white chocolate ganache and a honey, cinnamon butter cream. So much better than tossing those horrible-looking bananas into the compost.

What do you do when worries get on top of you? Has anyone got any great tips to share?