Melbourne was great. Especially considering how many times I almost pulled out over the last couple of weeks. I got a little freaked out about going. And I have pretty good reason - last year when I went, I came home to a son with a broken hand and a pending operation. I had almost convinced myself that something really bad was going to happen while I was away. But of course nothing did.

And then there was the fear of not being able to make the distance. Because I've only made it once this year and had some really ugly abortive attempts. Yes, I knew I could walk it but I didn't want to and I had this internal war going on with one side telling me that I could do it and the other saying I should have left it this year. At one point the 'you can do it' side even suggested that I could run it under 2hrs and that got the other side really freaked.

Sleep was hard to come by Saturday night. That was probably because of the internal war and definitely because I'd decided that I was in Melbourne for such a short while that I had to cram as many coffees in as possible. There was lots of tossing and turning but eventually I got some sleep. The alarm went off at five and the war in my head started up again. I felt so nervous about the race that I felt physically ill. I've done a race after being sick from nerves before and ended up having to walk half the way and I didn't want this to be really bad. Neither did I want to pull out because if I pulled out this time there would be a chance that I'd never race again. So I took a Valium. I had no idea how it was going to affect my running but I knew it would calm me enough to get me to the start line and that's all I needed.

By the time I'd found our squad I was feeling much better. We dumped our stuff, headed over to the start (via the loos) then found a spot in the crowd. The weather was perfect - cool and clear. And it wasn't long before we were off.

I had a plan for my race. It wasn't written in stone - it was very fluid - but it involved me running about 6 minute pace for the first half and then seeing how I felt and ramping it up if I felt good. And for the first k I was pretty close to my plan - 6:01. But that's where it finished. I was feeling good so I just went with it. But I kept waiting for the bottom to drop out - I hadn't been able to sustain paces around 5:30 all year so trying it for a half marathon didn't seem that sensible.

We ran away from the city, down St Kilda Rd to Albert Park. It always surprises me just how big this park is. In my memory it's only a couple of kilometres that we run in there but it's quite a few. We run around a lake and it's such an impressive sight - thousands of multi-coloured runners stretched out like a giant rainbow serpent. I kept trying to tell myself to relax, take it easy, enjoy the surroundings, this wasn't for time - this was to remind myself how far I'd come from the beginning of the year.

I got to about 12k and saw one of our squad members just up ahead. He was having a bad day so I ran across to him and checked that he was okay. Then continued on. Finally we were out of the park and on our way back to the city.

My legs were starting to feel the lack of training kilometres in them. They were getting a bit tired and heavy and I was starting to be a bit over it all - and I still had 4 kilometres to go. I didn't want to stop and walk so I had to distract myself. So I thought about the other runners in our squad who had wanted to run Melbourne but had had to withdraw with injuries and I dedicated a kilometre each to them. You can't stop and walk when you're running for someone else!

I ran past the 20k marker. We were getting really close to the stadium now. And I started to think about my past year and everything I've been through and of course I started to get a bit emotional. And then I nearly tripped so I stopped all that silly, teary nonsense quick-smart.

The course was a little changed from last year. They decided to make us run over a bridge in the last kilometre. It was an uphill that went on and on and on. You can tell from the picture just how much I enjoyed that. 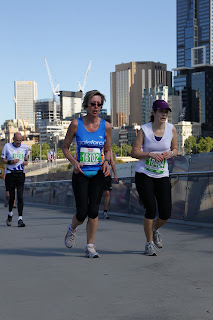 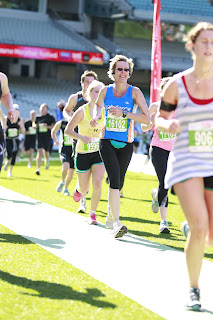 That was followed by a shortish downhill and then it was the final burst into the stadium. And pretty soon I was a half marathon finisher again. I stopped my watch at 2:00:12. One of those voices in my head had been right - I could have gone sub 2 if I'd had more confidence. But I wasn't complaining. Just to finish the run left me feeling like a champion. 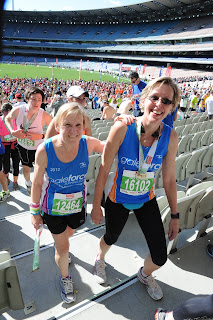