I know, I know! My last post was all about being wealthy without the need for things BUT I couldn't help but be a little excited to see this on my doorstep this morning AFTER I'd been out for breakfast the second day in a row. 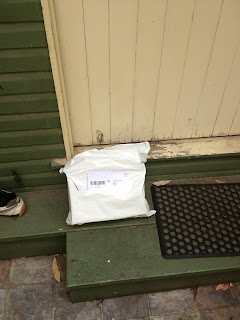 I didn't once for a minute believe it could be a surprise gift that Iven had bought for our forgotten wedding anniversary. I've been married to the man for 27 years and I'm used to the way he operates by now. Guilty presents for forgotten events are not part of his repertoire. 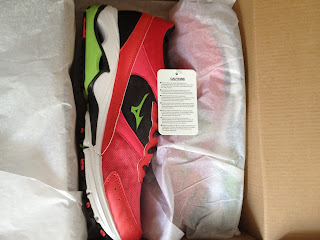 No, this is my own little guilty present to my feet. I'd forgotten just how long ago I bought my last pair of runners (No, last week's purple ones don't count. I need two pair in my rotation). For the last few weeks my feet have been sore after every run and hurt when I get out of bed in the morning. And that's a sure sign that my old shoes need to be put out to pasture - to run free and frolic in green pastures without my heavy clomping wearing them down.

These are the Mizuno Wave Rider 16 and I can't tell you which of my new pairs I like the most - probably because I haven't actually run in these yet. But if it's just on colour I think the red might just have the edge. They passed the trying-on-straight-out-of-the-box-without-socks test with flying colours. Don't my feet look fast in red? And doesn't that strapping make my ankles look sexy?!! 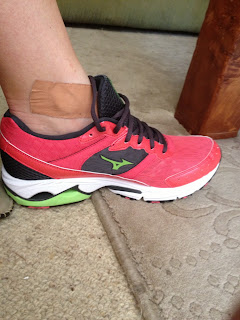 But as much as I love the new colour, I WILL NOT be buying a matching bra this time. Only hussies wear red unmentionables and I'm no hussy!

Unfortunately the quick arrival of these shoes have left me with a small dilemma. I didn't actually tell Iven I was ordering them. He's just about over the shock of the purple pair. And I'm wondering if it's just a little too soon.

Will he survive the shock of seeing me in this racy pair?  Was this my evil plan all along - you know, the ingenious, evil plan where I fed my husband cupcakes full of saturated fats which elevated his cholesterol and filled his arteries with lovely sticky plaque that at the first sign of elevated blood pressure (ie - when he saw me in these) would break off and block a vital coronary artery and then I'd be FORCED to wear an inappropriately short animal print skirt (and a red bra) to his funeral because, of course, that was his dying wish.

They're languishing at the bottom of the wardrobe in their box at the moment while I make up my mind what to do. I'll probably just tell him that it was a buy one-get one free deal. Or maybe I'll just butter him up with a nice cupcake before I do the big reveal. (Cue evil laugh)

I wanted to share this picture with you. I saw them as I was walking up to my other guilty pleasure - that second breakfast out in a row. They're bush Curlews and they live at the University of Queensland. The first time I saw them I thought they were ornaments because they stood so still but I've realised that they're the bird equivalent of a Living Statue, earning a living by standing motionless in bronze paint. 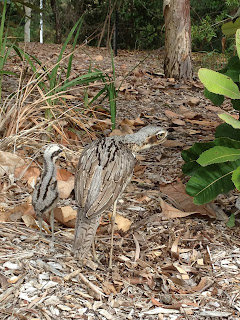 This was the first time I've ever seen a mini-me curlew. Cute!