My Brush With Celebrity

Occasionally in life you get a chance to rub shoulders with greatness. It's happened to me a few times in my fifty years. I've sweat next to the wife of a local newsreader at my gym. I got to discuss the virtues of netting vs tulle for a fairy skirt with a children's TV presenter. I've sat next to the captain of our local NRL team at a soccer match (I'm certain it was Sam Thaiday - well, pretty sure). And I sat directly behind the winner of Australian Idol, Stan Walker, in a Virgin lounge in Sydney.

But today I'd like to boast about my brush with Australia's newest football star. Man of the match from last night's World Cup Qualifier, Robbie Kruse. 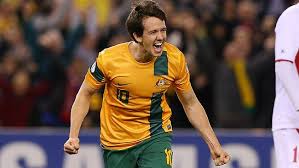 Nine years ago Robbie was a skinny little kid playing with my eldest Sam at Brisbane Toro. He was two years younger than most of the kids on the team but his talent was obvious. He was too small to ever play a full match - the bigger boys on opposing teams saw him as an easy target and he was often pushed around and over. But he was a tenacious player with fantastic skills and he just never quit.

At the breakup at the end of the season I was standing chatting with another mum when we saw Robbie head down the hallway to the toilet. He didn't shut the door and we were given a pretty good view of proceedings and it was then that I said to Anda (the mum next to me) that one day, when he was a famous Socceroo, we'd be able to say that we'd seen him pee.

So there you have it - I've seen a now-famous Socceroo pee.

And that's the closest, most intimate, brush with celebrity that I'll probably ever have because being presented with a gold medal by Hugh Jackman in my imagination doesn't really count. Unfortunately.

Has anyone else had a strange or interesting encounter with a celebrity?