Vindication and Shopping For Undies 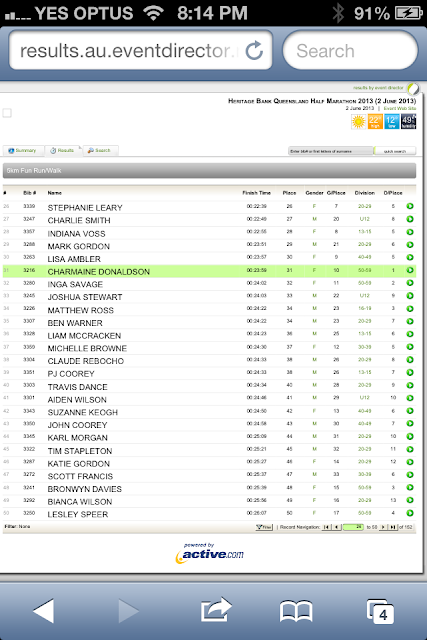 It turned out not to be too hard to get the results corrected from Sunday's race. And it turned out that I wasn't the only one to have issues with the timing. Someone commented after that post that they'd known of seven runners at the event and out of them, six had incorrect results. How does this happen with computerised race timing?

And for those wondering about net time vs gun time - there was only gun time at this race. The directors only pay for the cheapest timing package which doesn't include start mats. But the results were so poor I couldn't help but wonder if it might have been better to do it old-school. With a multi-timer and place tickets just like we used to do it at Little Athletics.

But on to more important real-world issues.

I'm going to be a bridesmaid in a couple of weeks. The 'maid' part of the title seems a little like false-advertising. Like I'm still young, innocent and perky. It would probably be more correct to be bride-matron or bride- been-there-done-that-got-three-sons-to-prove-it.

But regardless I'm excited about the upcoming nuptials. It will be lovely to see Bec and Tom tie the knot. And to have a weekend away from my kids and husband. And to get dressed up.

Did you believe that? I'm really (and that's not sarcastic at all) excited about getting all prettied up. Me! Who hates shopping and make up and fancy shoes!! But this time I haven't had to make any of the decisions. The dress was scouted out by the bridesmaid who likes shopping and all I had to do was try it on.

Admittedly there was a previous attempt at dress shopping before we hit gold. And it was on that occasion that I proved just how bad I was at the whole thing by being incapable of getting dressed without help. But it was hard to tell which was the front and which was the back. And that second dress at that tricky insert that was supposed to contain me not just flap down behind.

Dresses should not require a degree to be able to put them on.

The final dress, however is pretty idiot proof. Thank goodness. Because I am patently not gifted in this area.

But dressing up does not merely stop at the dress. There are shoes and wraps and accessories and underwear that also need to be sourced. And because the wedding is in just over two weeks I decided this week to tick a couple off the list.

The shoes weren't too bad. Except that we needed to look for flat, sparkly sandals and it's winter so it's easier to get boots than sandals. I did manage to find a lovely pair with the help of a very long-suffering sales assistant that knew me on sight by the third time I'd been to her store. She liked me enough to let me strip off out the back and put the dress on so I could get a better idea of how it would look without jeans.

The underwear was next on the list. I'd stupidly thought I'd actually try and lose a little bit of weight to get a flatter tummy to wear under this fairly figure-hugging dress. And I DID try for a day. And then there were left-over lollies from my cake that had to be eaten before they went mouldy. (Lollies go mouldy don't they?) And it would be irresponsible of me to serve up a cake without tasting the batter to make sure it tasted okay.

So while it might have been good in theory, the reality is that I will being using artificial means of giving the illusion of a flat stomach. So after buying the shoes I headed off to a department store in search of industrial strength lycra. The only problem was that I had my eldest in tow. And despite him being one of the causes of my problem, he really was very against being part of the cure.

Who'd have thought 25 year old sons would hate to shop for underwear with their mothers?? I've shopped for his underwear for years and yet he gets all thingy about standing in the lingerie department with me.

Needless to say the underwear shopping was brief. (And no I'm not sorry for the bad pun.) I decided I'd try again the next day. But the next day came and I had both my eldest and youngest in tow and nineteen year olds are even more funny about standing in the lingerie department with their mothers.

I will try again next week. Without any of my progeny. Wish me luck!