I love getting parcels in the mail.

The parcel that I got this week fit into that category. I know that I should be grateful to have gotten it. And I know that the parcel was just the government's way of saying 'we care about every tiny little detail of you'. I also know that by doing what the parcel required of me could possibly save me from a very horrible and painful death. But that still doesn't stop me from being squeamish.

But a little voice inside me head wouldn't let me. And so I sucked up every last bit of preciousness and dealt with it.

This was what was in the parcel. 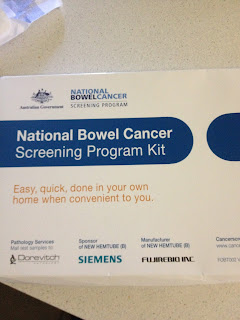 It contained lots of instructions and vials and labels and stuff. All very scientificky. Reminded me of my university days and those hours spent taking samples of intestinal fluids from different areas of a sheep's gut.

The instructions were pretty straightforward and apparently hilarious if you're not the one who has to undergo the test. #1 son, Sam, didn't even try to keep a straight face when he was reading out the instructions to me. He particularly liked the stylised drawing of the faecal sample (poo to those of you who haven't had my scientific background and s#@t to the rest of you who like to call a spade a bloody shovel). 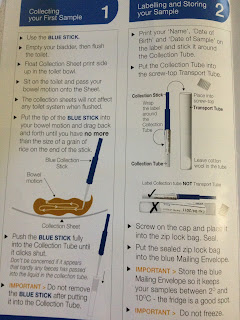 I felt the pressure of performance all week. I didn't want to have to do the test on my running mornings because delving into ones own faeces at 5:00am is beyond what my sensibilities can deal with. And taking it on my run just in case it was one of 'those' runs didn't seem like a fun option (although the vials would have fit nicely into my Spibelt). Having to explain to someone who's seen you squatting behind a bush that you were just doing a highly classified scientific experiment for the government would probably see you on the end of some very sceptical stares.

I was very relieved (no pun intended) when I could finally post off my samples - in a normal letterbox with other people's important mail. I said a little prayer as the parcel disappeared down the gaping maw of the box that I'd screwed up the test tubes good and tight. And then another little prayer for the person who's job it is to have to open all those returning parcels. Because as much as I thought mine was a pretty horrible parcel to receive, theirs is infinitely worse.

I couldn't finish this post on that unsavoury note so I'll leave you with a couple of photos that are way more pleasant. 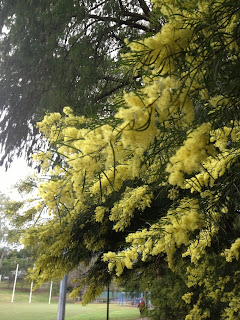 The wattle is out at the park that I run through near my home. I suspect that it's that wattle that's been making my eyes itchy - because they've only been itchy since the flowers have come out. But I'm happy to endure itchy eyes just because they're so pretty. My nodding acquaintance that you can just see at the bottom of the picture agreed that it was a beautiful sight and she didn't think it was at all weird that I was taking photos of it on my run. 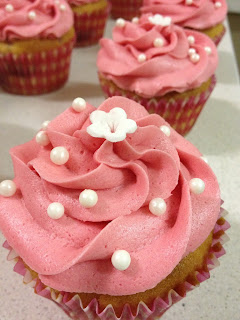 More cupcakes! I haven't had so much sewing to do lately. Had my week's work finished by Wednesday afternoon which left me with nothing to do on Thursday and Friday except bake. Vanilla berry cakes were what #2 son Josh suggested and this is what he got.
Posted by Char at 8:05 PM