Getting Ready For Gold Coast 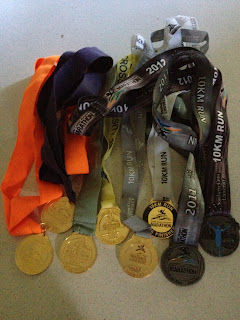 There's only three days till my ninth Gold Coast 10k. Three days till I add a ninth medal to my collection. And there's lots of decision-making and preparation before I can get away.

Not running preparation. That's all done and dusted now.

At this point there's nothing more that I can do that will make a difference on the day. Since the beginning of the year I've run 22 speed sessions and completed 69 other runs which include three races. I've run through 2 pair of shoes and put holes in the toes of four pair of socks. I've sweat gallons. And tried to pretend that peanut M&Ms make the best recovery food ever invented (I'm pretty sure that the peanuts are chock-full of muscle-building protein and all that sugar is now stored as glycogen in my muscles). The only preparation that will make me run better on Saturday is to get plenty of rest. (Take note love-of-my-life: the most important commandment that you have to follow this week is Thou Shalt Not Snore!)

A lot of the decision-making all involves food at this point. Most importantly - what should I bake? There's over 100 people running under the GaleForce Squad banner this year. That's a lot of hungry mouths. To say nothing of supporters - families and friends.

Of course I'm not solely responsible for feeding all those hungry mouths but I do want to make sure that once again the GFRS tents have the best baked goods at the event. Pity that's not one of the award category.

So my oven has been fired up and Toby's tongue's at the ready to help with all that pesky bowl-cleaning. I've just pulled a batch of cookies out (the pink M&Ms are left-overs from Tom and Bec's wedding) but I've hit a mental road-block. I have no idea what else to cook. There's just too many options. 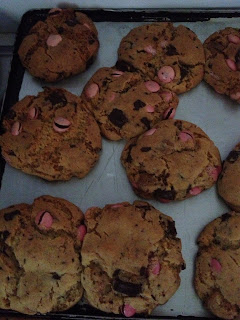 Do I go with the tried and true chocolate cupcakes? And if I do, will I ice them (always potential for a disaster when braking suddenly on the trip to the coast and then what if the weather turns warm?) Or will I go the caramel? I've got lots of tangelos from our tree so I could make some tangelo and poppyseed muffins. Caramel slice? Cranberry and white chocolate slice? Mocha date scones? Pumpkin scones? Anzac biscuits?

If I had unlimited time and unlimited energy I would make them all but there's a little thing called work that's really got to be done. And then there's the issue of actually getting them to the tent. My usual beast of burden has decided that he'd rather spend the weekend at home than have me ignore him for two days while I talk boring running stuff with my running buddies. He doesn't find it as amusing as me to rate the shirtless male marathoners on a scale of ten to put-it-back-on. And he doesn't like seeing my disappointed face when I find out he missed that action shot of me when I came flying past our tents. (Let's face it I'm not that fast and he should have time to take at least five pics).

Let's just say that our idea of a fun weekend differs somewhat and leave it at that.

The baking issue is just one of my dilemmas. I also have to decide what I'm going to wear. It's looking like it'll be about 11C. That's just over 50F. Cool but not ridiculous. So do I go shorts or my 3/4 tights? Singlet or t-shirt? Hat or hair?

And will I bring my music? That seems to be such a contentious issue these days. Personally I've never had any issue with runners using music - I have more problems with people who dodge and weave dangerously, who cut in front of you as you're going through water stops, who stop dead in your path and force you to take defensive measures and those that start way too close to the front according to their running ability.

Then there's just that little annual argument that I have with my bestie Natalie. She thinks it was my idea to commit to running 10 years of 10k together. I'm sure it was hers. Neither of us wants to take the blame credit. Let's face it, at our age we're never going to remember what happened nine years ago. I have issues remembering what happened last week.

And finally, what colour shirt are we going to be lumped with this year? Participants in the 10k seem to be treated as the poor, colour-blind cousins of the Gold Coast Marathon weekend. We've been treated to some of the most hideous coloured shirts. I have grey, pale yellow (only certain skin tones work with yellow) and an insipid minty colour that I have problems describing (and I work with colours). They are always a man's cut despite at least half of the competitors being female. And most of my shirts have been used as rags or been given away. But I haven't given up hope. One year we're going to end up with a shirt that I like.

But despite all these uncertainties there's one thing I know for sure. I'm going to have a fun weekend.