There's nothing like a letter marked 'Confidential Medical Results' to give you letter-opening anxiety. I got one the other day and I knew exactly what results they were talking about.

Remember my post about bowel cancer testing? That's the only test I'd done recently so I surmised that it was those results (and the fact that it had National Bowel Cancer Screening Program printed on the envelope doesn't detract at all from the brilliance of my deduction). I hadn't been at all concerned about the results of the test. But the moment I saw those words 'Confidential Medical Results', I assumed the worst.

I have a tendency to do that. If a police car is behind me in traffic I'll assume that I'm going to be pulled over even if I've done nothing wrong. If the shop-lifting alarm in a shop goes off as I'm going through I automatically feel guilty. If one of my kids complains about having a headache I usually jump straight to brain tumour, aneurysm or viral meningitis. I'm sure this is a rational response in situations of potential crisis - assume the worst so when it doesn't happen your sense of relief and gratitude is almost like an endorphin high.

I had to talk sternly to myself before I could actually open the letter. Something along the line of -'Chances are that it's probably okay and just because it looks ominously official doesn't mean that it is. And IF you did turn out to be that one in 2000 women who ends up with bowel cancer, wouldn't you like to catch it early when it's treatable?'

When I finally had calmed myself enough to open it I only had to read one word to know that everything was just as it should be. Pleased. They were Pleased to advise me that the result of my faecal occult blood test was negative.

It was just like getting my exam results back in my uni days. But without being graded. This test is only pass/fail but it made me wonder if they had to grade it, what would I have been given. As I can be a perfectionist and a little competitive at times, I'd like to think that I got an A+. After all they did start the letter by thanking me for taking part and sending back my sample. I don't think I'm reading anything into it by thinking they'd only thank the highest performing participants.

But onto more important issues.

Today's Tuesday and Tuesday means only one thing. Speed session.

My love/hate relationship with speed continues. I love going. I love catching up with the squad. I love breakfast afterwards. I love it when I can get all my intervals at around the same pace. I love the recoveries. And I love that I can really push hard this year.

But I hate how hard it gets as the session goes on. I hate the 100m recoveries which seem way too short when you've run 1600m hard. I hate that despite my best efforts, I do tend to slow down. And I hate that Coach Chris really enjoys seeing us in pain - the more we hurt, the happier he is.

When it's over I love the way I feel - like I've worked really hard, because I have. We all have! And the fact that there are more loves than hates means that I keep going back week after week after week. 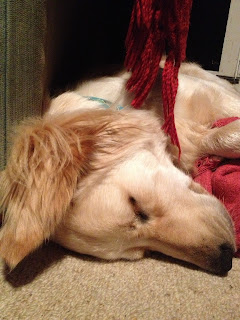 I may need to do as Toby is to get me through the day today. Some days I'm extra grateful that I work from home.