The end of 2016 is staring me right in the face. Well it is when I go to the toilet and shut the door because that's where we keep the calendar. Not that shutting the door is compulsory any more. Stuff has happened here. Major stuff! Stuff which means that I can be a bit laissez faire about the whole toilet door decision.

Our last chicken has flown the coop. After almost 30 years of having buffers in the house to stop Iven and I from sitting silently across from each other twiddling our thumbs and wondering what to talk about. Actually that hasn't even happened because Iven's flown the coop as well. But just for a week to visit his Mum. The thumb-twiddling fun starts tomorrow.

Admittedly I knew it was coming. I just didn't know how it was going to be timed. #1 son, the last hold-out, was going to be moving out when his fiancée moved back to Brisbane in January. But then her aunt decided to lend them her house while she went and grey-nomadded it around Australia for 6 months.

In the meanwhile Iven needed to pop down to Gunnedah and mum-sit for the week and in my excitement devastation I decided that I couldn't face cooking meals because I'd obviously be too busy pining for my lost love. Okay, it was more like I was taking a holiday from one of my most hated chores for the first time in ummmm almost 30 years.

To make this decision official and avoid any meal-expectation-disappointment for #1 son, I made the announcement on Friday.

"Sam, because Dad's going to be away next week I've decided I'm not going to cook dinners all week."

I've been wondering ever since if I'd stopped cooking earlier would the mass exodus have happened sooner? Hmmm. Then I started wondering would I be lonely. A whole week alone! Not even a year ago we would sometimes have eight people in our house. It was getting pretty squeezy.


So it's been a very quiet week at Chez Donaldson. All except for the wolf pack, who Iven has trained to maliciously come whine at my door at 4:00am every morning. Nice one Hon - I've had all week to plan my revenge.


The 4:00am waking up calls have been a little annoying on run days when my alarm is set for 4:30. Believe me that extra thirty minutes of sleep makes a hell of a difference. And it was especially annoying on Wednesday morning when I'd been woken up at 2:11 (yes I checked my clock) by the toads in my neighbours pool having sexy-sexy time. Man, those suckers are loud. And they have endurance!

But today was rest day so the wolf pack was really considerate and woke me up at 3:58 am. So I got up, opened the back door, fed them (no point in putting it off or they'd have been at me again by 5:00 am) and crawled back into bed for just a few more minutes or even hours if I could manage it. And one by one all three of the dogs snuck into the bedroom to assuage their need for human company.

Ricky is always the neediest. He's 26 kilos of black and white over-enthusiasm. His version of sneaking into the bedroom involved a two metre long jump from the doorway onto the bed, lots of face-licking and tail-wagging. Bubbles, the geriatric mini fox terrier, just waddled in, fairly unnoticed and leapt what is her equivalent of a 'tall building in a single bound' onto the end of the bed. Toby was actually the only one who snuck. And he does it because Ricky intimidates him - as do flapping pieces of plastic when we're out walking, little old ladies who want to pat him and most other dogs that he's never met before.

Ricky doesn't like Toby getting any of the pats so he did his best to keep Toby away from my outstretched hand by cutting him off at the past and humping him. It's a very effective way of stopping forward progress - having a Dalmatian put you in a death lock and hammer away at you. Not that I'd know personally because Ricky's affections don't generally extend any further than poor long-suffering Tobes.

Ricky also has great endurance. Probably because the Dalmatian was bred to be a carriage dog - to run alongside carriages way back when there actually were carriages and dogs were allowed to run on the road. He has about as much endurance as a pair of toads going at it in our neighbour's swimming pool at 2:11 in the morning. Toby was starting to look distressed and his knees were starting to buckle under all the enthusiasm when all of a sudden there was a Christmas miracle.

I farted. Quite loudly. Hopefully loudly enough to wake the neighbours who encourage rampant nocturnal amphibian copulation in their backyard without considering the sleep patterns of their fence-sharers. But definitely loudly enough and with such unusual tone (I blame the berries and cherries I've been eating over the last couple of days) that Ricky did a spectacular dismount and went off in search of the source of the incredible noise. 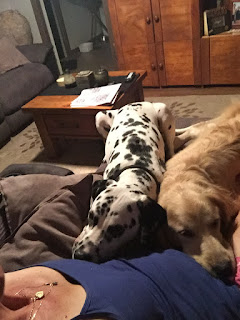 I know, I'm ashamed of me too. But it was really funny. And that's been the tone of my week. You don't ever need to feel lonely when you've got a devoted wolf pack to keep you company.
Posted by Char at 2:38 PM 6 comments: