A few things have happened over the past few days which have made me realise that I have lots to be grateful for. Gratitude is hard to come by when things are not going as you'd planned. But gratitude really helps with attitude.

The first thing that happened was a conversation with one of Josh's friends. I just asked him how his Mum was doing. She used to belong to my running squad but had to have surgery. Recovery has not gone to plan and she now needs a walking stick to help her get around. She's about my age.

My next conversation was with a squad member who's coming back after almost a year absence. I thought she'd been injured but she'd actually been quite sick needing a few hospital stays.

I've been so frustrated with having to slow right down and cancel events but in the scheme of things it's only a small speed bump. I can still run and I have my health. I have a lovely family and lots of supportive friends. Generally life is good.
Posted by Char at 8:27 PM No comments:

I've never thought myself as delusional. I've always considered myself to be fairly rational with a realistic outlook on life. So it's come as a devastating shock to find out the truth - I'm not Superman (or woman if we want to be gender-anal) I am aging whether I like it or not.

Forty-six isn't exactly old but neither is it young. Forty-six is middle-aged and middle-aged means that your body doesn't function quite as efficiently as it used to. I've been running for years but only training seriously, with a squad and a coach, for two years. And I've been training hard. Speed on Tuesday, a tempo or interval run Wednesday, hills on Thursday and a long, slow run Saturday (which was never that slow) I'm really diligent with my program - rarely missing a day - plus I like to fit in as many races during the racing season as I can. I ran every run as hard as I could and neglected the very thing that's fundamental to training - Rest!

Overtraining Syndrome should be re-named Under-recovery Syndrome. It's subtle. Creeping up on you disguised as other minor annoyances that can be explained away. The reason I ran so poorly at the Brisbane Marathon Festival was because I was coming down with a stomach virus and I was slow in the Sydney Half because of the hills and everyone knows that I'm not great at hills. The fact that I felt crap every day, even when I hadn't trained, was incidental. But when people started to ask what was wrong, why wasn't I running so well, I had to assess the situation.

I went and had blood tests which showed that I was remarkably healthy for someone who was always exhausted. Not anaemic. Thyroid working well. Not going through menopause and great cholesterol levels. My heart rate was under 70, which to most people is good, but to me was high. The only thing it could be was Overtraining Syndrome.

Being the self-appointed 'Google Queen', I spent a lot of time researching OTS and apart from the physical side of things there is a large component of emotional in the mix. The situation that my family has been through this year (that I may or may not elaborate on at a later date) would definitely have been compounding things. It was a 'Perfect Storm' of factors that has brought me to this point. And yesterday I got the news that I wasn't to run two events that I'd been looking forward to. Crap, crap, crap, crap, crap!

I did know in my heart-of-hearts that it probably was a good idea to scrap them but I still didn't want to hear it. The good news is that Canberra Marathon is still a strong possibilty. And I had an okay run yesterday - almost 7k with a walk up the hill and not feeling like I needed a nap in the afternoon.

Actually, I could still be Superman - Superman who's been exposed to Kryptonite.
Posted by Char at 6:34 PM No comments:

Three weeks. Twenty-one days. Five hundred and four hours. That's all the time left to complete all the costumes for the end-of-year dance concerts. Things are ticking over quite well. All the samples, bar one, are made and the majority of the sizing is done but there's no time to rest on our laurels. It's heads down and tails up - go, go, go.

I quite enjoy this time of the year. I can see the end in sight and holidays on the way. Having my own business has given me a certain amount of freedom and part of that freedom involves taking all of the school holidays off. The business tends to revolve around the school year with school aerobics, gymnastics, dance and swimming all being extra-curriculars. The trade-off, though, is a not-substantial income but I can live with that.

It's funny to look back and see how my career path evolved. When I was a kid all I wanted to do was to be able to work from home but by the time we had careers night at high school ( I think that was grade 11 ) I knew I was destined to be a Vet. I scored highly enough to get into the course and proceeded to complete the five years required, graduated and promptly got married. There were few jobs in Brisbane and Iven and I weren't prepared to move so I got some part-time and locum jobs and when I got pregnant with Josh, my second, I made myself a pair of togs and Physique Aerobicwear was born. 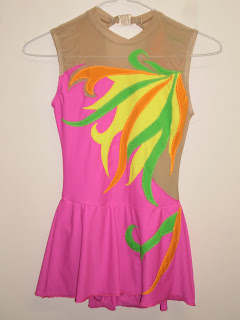 That was 22 years and countless leotards ago. I think I'm one of the lucky few that actually enjoys their work. I get enormous satisfaction from the creative side of things and I love putting smiles on the faces of little girls. And I get my need for glitter and sequins and pretty things - the need that was never satisfied because of having three sons - well and truly out of my system. 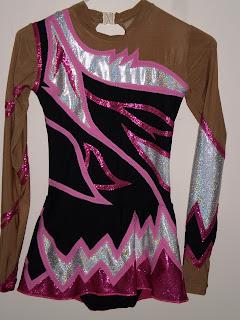 I've just returned from the shops and coffee with my sister. From where I was sitting I could see a cockroach in its last throes of life desperately trying to make it to the rubbish bin - the holy grail for cockroaches. While not overly fond of cockroaches, I had to admire its tenacity. It kept crawling, dragging its innards behind it, until it drew its last breath.

This brought two questions to mind. The first was - did the cockroach hitch a lift with me to the shops? It could easily happen being that I don't like the idea of insecticides being sprayed all over our house for us to absorb (Yes, I know cockroaches carry disease but exposure to chemicals can cause cancer) I have a 'live and let live attitude' where if they're out of sight they're out of mind but honestly I've seen many a dead cockroach in our kitchen where the cause of death is old age.

My second question was did I look a bit like this particular cockroach this morning at training? Painfully slow but determined even though I've been stomped on by life and I feel like the guts have been crushed out of me (Melodramatic I know - I swear I could write for Days of Our Lives) Today's session was Speed and I was so not speedy. Not only was I not speedy but even running slow felt exhausting. I hate overtraining syndrome! I hate that after all my hard work I feel less fit than when I started! And I really hate being patient!!! If I wasn't an adult I'd probably throw myself on my back and kick my legs around, screaming with frustration just like an upturned dying cockroach. I miss my daily endorphin fix. Must be an endomorpho-junkie.
Posted by Char at 5:41 PM No comments:

Marathons are hard. 42.195 kilometers of sweating, puffing, blisters and doubting.The doubting's probably the hardest part. Did I train hard enough? Will I make it? Why am I doing this? All that lack of self-belief floats around those few firing neurons that aren't totally absorbed in the process of breathe-in, breathe-out, left foot, right foot. It starts as a whisper that you try to drown out with those boppy tunes on your MP3 but the whisper gets louder until it's like the voice of a hiker lost in the Grand Canyon desperate to be found. Somewhere you have to draw up all the strength inside to run on despite the internal silent screams that are telling you to stop.

Unfortunately I'm not yet speaking with the voice of experience. The farthest I've run so far is 25k (that's not including the Warwick Pentathrun earlier this year - 42.2 k in 5 events over 2 days). I'm 46 and have just come through one of the hardest years of my life. I'm suffering from over-training syndrome at the moment but still planning on running the Canberra Marathon in April next year. Insane? Well, maybe but if I don't run that maybe will be a definite!!