I Do It Cause I Love You

It happens to me quite a lot - now that I've got to a certain age.

I'll be out and I think of something that I have to do but really can't until I get home. But by the time I get home I've forgotten it only to remember it again while I'm out. Eventually it gets done but not without a lot of exasperation on my behalf.

And that's exactly how I felt on Sunday morning as Iven and I were stepping into an elevator on our way to the movies. He'd just turned in the right direction under the right lighting and I'd seen them again - the two blackheads on his forehead that I'd spotted last week while we were out at breakfast. How had a whole week passed without me removing those little suckers?

I've always seen it as the ultimate gift of love to keep my husband's body free of black and white heads. Or maybe because we were pretty poor when we got married and had to find our own entertainment that this ritual of grooming began. I would pin him to the bed whenever I spotted my quarry and squeeze until I'd vanquished it.

I'd seen the two blackheads on his forehead the week before and vowed to get them once I'd gotten home. And then promptly forgotten. I have no idea why Iven didn't remind me. Maybe he forgot as well. Or maybe he'd seen that I'd let my fingernails grow fairly long and was trying to weasel out of my tender ministrations. All I knew is that when I saw them again yesterday I vowed that the sun was not going to set with those little suckers still embedded.

Unfortunately there was someone getting onto the lift when we were or I would have dealt with them immediately.

I did look around to see if there were security cameras - if I got the opportunity was it going to be recorded for the viewing pleasure of the security staff? I can just imagine the footage now. Me looking at Iven's face with lust in my eyes. Pressing him hard against the elevator wall and going at him until ... Sweet relief. Traces of 50 Shades of Grey and some traces of pus.

Our travel companion was only going up one floor so I held my breathe when she got off. But of course someone wanted to get on. They travelled up only one floor and got off, again to be replaced by someone else. And this happened all the way to the top. It's almost like Iven had organised to have body guards looking out for him but teasing me at the same time.

It was hard to concentrate on the movie. I kept thinking about the two giant blackheads sitting next to me and how much satisfaction I was going to get when they finally disappeared. Two and a bit hours later we were home and they were gone. My status of 'most excellent wife' has now been restored.

It got me thinking about the noises that I sometimes hear from my boys' bedrooms. Those cries of 'Leave it alone - it's not ready!!'. And it's like music to my ears. Their girlfriends care enough to groom them just as I did my husband. They're keepers for sure! 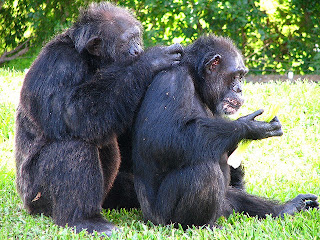