It's Not Bigamy If You Just Propose

I knew Saturday's run was going to be hard even before I'd run a step.

I'd known it was going to be hard for the week before. As soon as I'd seen what the weather was supposed to be. And I'd been hoping all week that the forecast would change. A low of 23C with the chance of showers and maybe storms. That means only one thing in my world. A really humid, sweaty, chafe-inducing run. And I had 24k to get done.

I was even desperate enough to beg Coach Chris to do something about the weather. 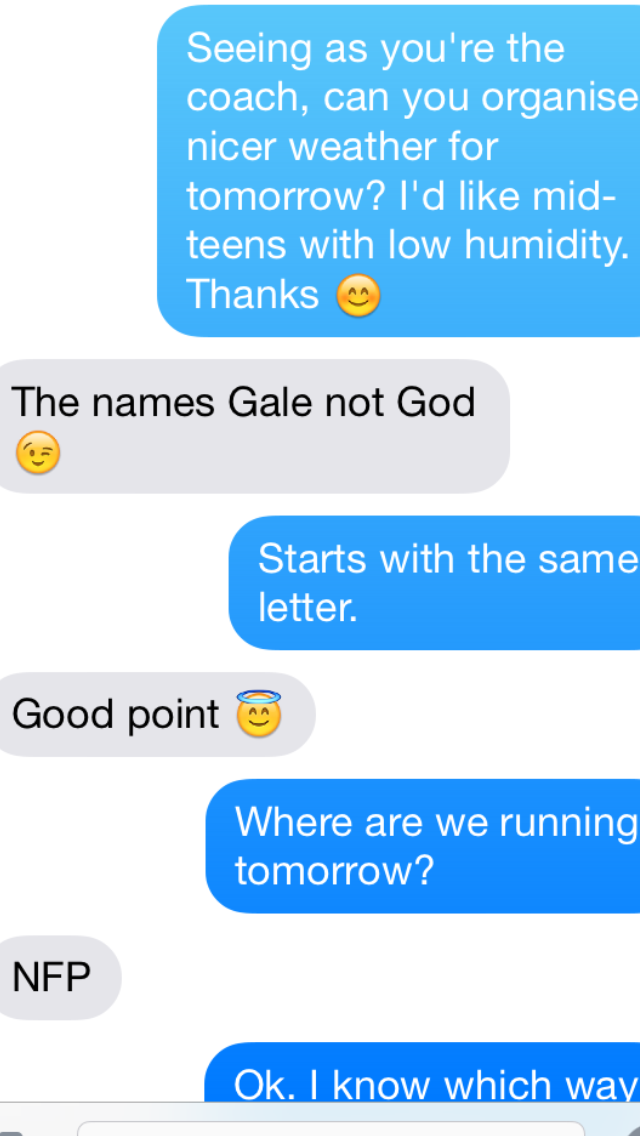 He had some lame excuse why he couldn't help out. Well, two can play at that game. His cake plate may be empty when his birthday comes around next year. If I can remember to hold a grudge for that long.

Thank goodness that I'd organised to run with someone or I may have stayed in bed and skipped the first four kilometres that had to be done before meeting up with the squad. Yes, there was a little bit of rain but not enough to make any difference to the temperature. It was just going to be a matter of keeping a very moderate pace, drinking often and trying to keep my mind off how horrible it was by passing the time talking to Craig, one of the men-not-my-husband-who-I-meet-in-the-dark.

I'm going to blame it on the torrid conditions. The fact that I did something out of character. Something that my husband doesn't need to know about. Something that Craig's wife shouldn't know about either if she's the jealous type.

Somehow these words slipped out of my mouth.

"Will you marry me?"

But what's a girl to do when she hears that her companion regularly cooks dinner for the family?! And does the shopping!! I thought that men who did that were unicorns. Urban myths.

I took back the proposal when I heard that he wasn't a very good cook. But I'm willing to revisit it if he takes a few classes. And I'll even proffer some suggestions of cuisine to focus on - Thai, Vietnamese and Indian. No need to worry about the sweets side of things. I've got that covered.

And in the meanwhile I'll just have to put up with my husband of 29 years who I can manipulate into buying me my favourite Vietnamese takeaway by making him think it was his idea.
Posted by Char at 5:52 PM