Where Did He Get It From?

I don't know where he gets it from.

I'm talking about my #1 son. One of the lights of my life. Except for the fact that he graduated as a physiotherapist and moved to Melbourne almost straight away - before I could utilise his free services. He wouldn't charge the mother who'd changed his poopy nappies, wrote poetry assignments for him, kept him supplied with cupcakes, brownies and cookies which were in hot demand for lunchtime bartering and supported him from the side of the soccer pitch for what would add up to be years of my life. Would he?

All bitterness aside, I recognise a lot of his traits as ones he's gotten from me. All the good ones of course. The not-so-good and the little-bit-annoying ones came from his father. Obviously!

But there's one that has me totally stumped. And he showed it in all its blazing glory last week. After I'd sent him a slightly bragging, please-pat-me-on-the-back text. About the race. And my, let's be honest here, awesome result.

And because I'm being honest I'll admit that part of the reason that I had to brag to him was because he'd run a 5k the previous weekend and run it in 24 mins. My 23:06 was obviously superior and I wanted him to know that there's a bit of life in his old mum yet.

His response was as gratifying as I'd wanted. "Wow fast Mum. I'll have to pick up my pace."

I didn't know I'd poked the dragon. But I realised it when I got this text later that afternoon. 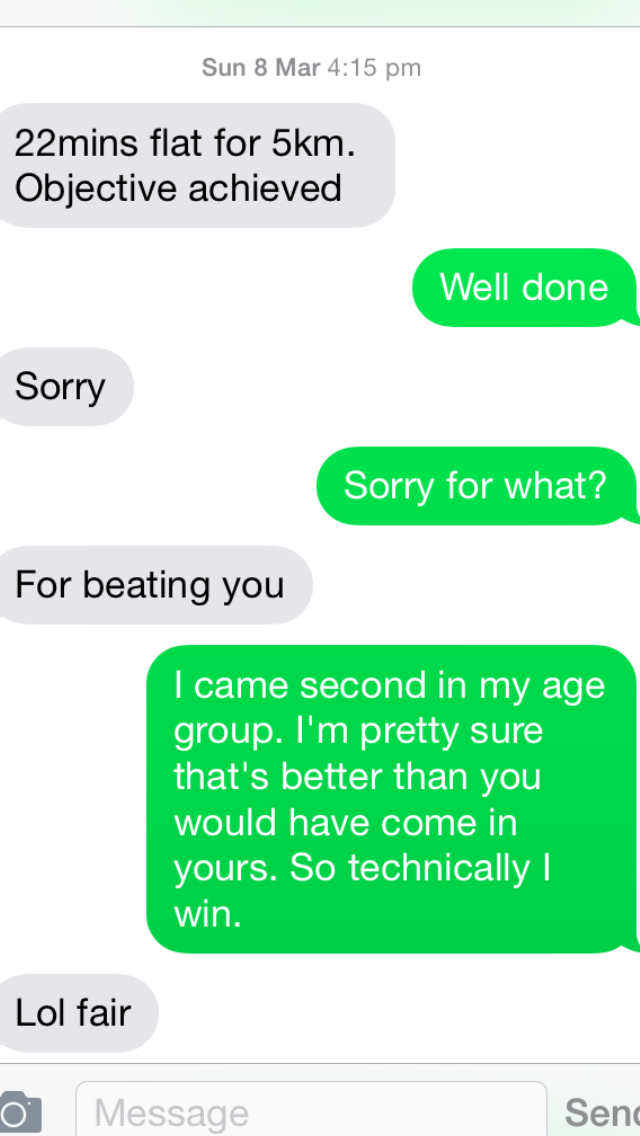 Competitive much? Actually I'm kind of flattered that my time was respectable enough for him to want to beat it.

So I'm wondering which race I should enter to try to beat his 22mins. And I'm still trying to work out where he got that competitive streak from.
Posted by Char at 11:20 AM