Have you ever had a race that's gone horribly wrong? Where all the plans and dreams you'd had for it are flushed down the toilet that you'd wished had materialised at the 15k mark. Where you start with a bang, running controlled and strongly, but end with a mere whimper that you can hardly utter because you don't have enough breath.

I definitely have. I've had some mightily ugly races. Races that should have been forced to wear a paper bag over their heads because they were just that hideous. Races that made me wonder why I even bother.

And then there was yesterday. When I was reminded exactly why I bother. Where it all goes to plan even though I didn't have a plan in my head because I know just how horribly plans can end.

Actually, I lie - I did have a plan. A very simple plan. To run how I was feeling. To just listen to my body.

I also had a goal for this race. Not a time goal - a personal one. To get to the line without any anxiety. To be calm. Because not being calm wastes an awful lot of energy and I needed my energy for more important things.

I'd driven to the coast the day before to spend time with a friend and to pick up my race kit. Thank goodness for the little man in my phone who got me to CBUS Stadium with no dramas whatsoever. Even when I didn't follow his instructions, he never lost his cool with me or told me I was an idiot. He just recalculated and got me back on track.

I could have picked the kit up on the day but I wanted to get some idea of where I'd have to go the next morning. Step one in making sure I stayed calm. I also wanted to see the hill that everyone had told me about. It was short but it was sharp and we were going to have to run it twice.

I beat my alarm on Sunday morning after a pretty ordinary night's sleep. Too many loud, drunk idiots who must have known I was wanting a good night's sleep. I was ready to leave by 5:00 and was at the stadium by 5:30. And I found my posse with no trouble at all. 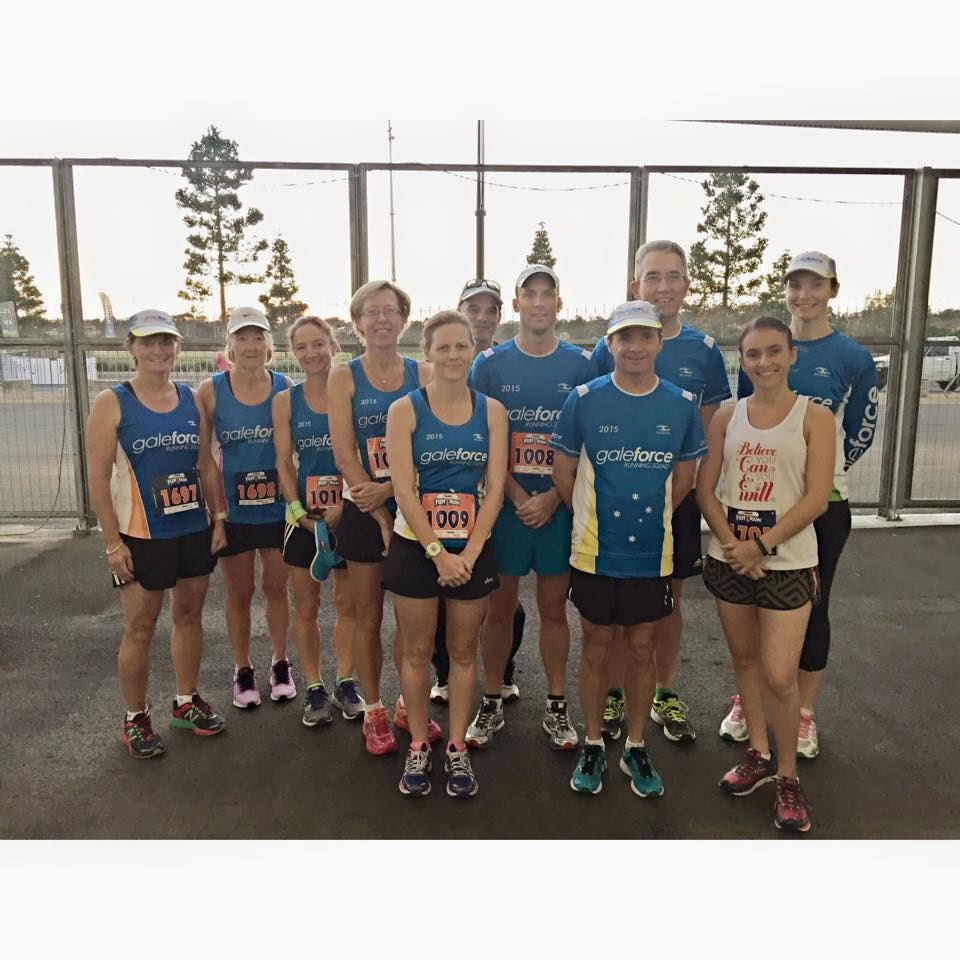 The venue was excellent. And yes, that means the toilet situation. Real toilets. Clean toilets. And plenty of them. It was a runner's dream. I did not have to queue once.

It's also quite a small event which meant that I was almost right on the starting line. And that meant that when the gun went off I could just run - no trying to get around slower runners or having to slow down till I could make a break. Just run to how I was feeling. And apparently I was feeling like running my first kilometre in 4:50. Probably a little faster than what I'd expected.

Seeing the 4:50 made me worry just a little. Had I gone out too fast? Would I pay for it later? It wouldn't be the first time that I'd been a little over-ambitious. But I kept reassuring myself that I've been running strong lately. I've had some really good, confidence-building tempo runs. I just had to trust in myself and my training.

The hill was between the first and second kilometre and I'll admit that it did bite just a little. Okay on the first lap. Wasn't so sure about the second. But I reminded myself to stay in the kilometre I was running. I didn't have to deal with it until I had to deal with it. That kilometre was just over five minutes but once we were on flatter terrain my splits were all coming up with a four at the start - 4:48, 4:50, 4:57, 4:53, 4:57.

I'd been told that after that hill the course was pretty much flat. And I'd like to categorically state that that's not true. Especially to someone who counts a speed bump as a hill. It was undulating and on the way back (it was a double out and back course) there were a couple of long, slow rises. And judging from my next split it was in the eighth kilometre where these rises were - 5:05.

My take on the event is that it's one that's really well worth doing. The venue is great. Lots of well-manned water stops. It was well marked and marshalled. The only slight negative I have is the hills and even they didn't have too big an impact on my race. The fact that we had to run the course twice didn't phase me either because at each turnaround I thought 'there's only five kilometres till the next turnaround'. It helped me divide the course into bite-sized chunks that were easier to swallow.

I left the race on an endorphin high and then proceeded to do a couple of things that tired, euphoric people should never do. I went shopping and came out with three new running tops and a pair of shorts. Then I drove home and baked cakes for this week's round of birthdays. Good intentions to get on top for the week ahead but in my tired, addled state I used the wrong flour and they were a total flop. Lesson learnt.
Posted by Char at 3:24 PM