Getting A Handle on Things.

I never like getting certified mail. From past experience the only good thing that I've ever got that way was a passport. Usually it's some demand that the sender isn't going to let you ignore.

I got a certified letter just a couple of days before my marathon. From my doctor. And I knew immediately that it had something to do with the results of the Pap test that I'd had over a month before. And I was right. 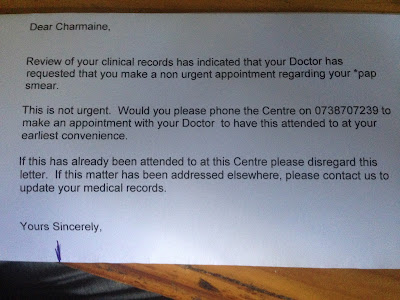 The only saving grace to this letter were the words 'non urgent'.

There are plenty of reasons that you might get a letter like this. The first sample might have been flawed. There may have been blood in it or infection or not enough cells. The sample may have been misplaced or the slide broken. There may be cell abnormalities relating to inflammation. A recall letter does not necessarily mean that you have cervical cancer. But of course it's hard to not think that when you get a letter by registered mail.

Of course I didn't want to have to try and squeeze in an appointment in the only day that I had before the marathon but I did want to know if I was going to have to do a repeat test because there's no point in scheduling an appointment for a repeat test while it's that time of the month. So I rang the receptionist and asked if I was going to have to have a repeat test and she said that I would but that there was no urgency. So I decided that I wasn't going to waste any energy worrying about it when I had bigger fish to fry. So I shoved it to the back of my brain to deal with at another time.

Doing that was like trying to sweep a small pile of manure under a rug. Most of the time I could ignore that it was there but occasionally a waft of something unpleasant would come seeping out to remind me that I hadn't actually dealt with it yet.

Well today I dealt with it. I'd made the appointment last week after telling a friend that I had to. So I'd feel accountable. I had to wait a while to see the doctor and I tried to placate my over-active imagination with a game of sudoku - which I couldn't finish because my brain was elsewhere.

When I was finally called in, the doctor asked why I was there and when I told her that I'd gotten a certified letter about my results she pulled them up and found ...

Nothing! The results were perfect. But the medical centre had recently had a computer upgrade and there had been a few glitches.

Not a particularly exciting or funny story but it's another lesson on worrying for a worry wart. Most of the time the things we worry about never happen. And if they do worrying didn't stop them from happening so it's a complete waste of time and energy. 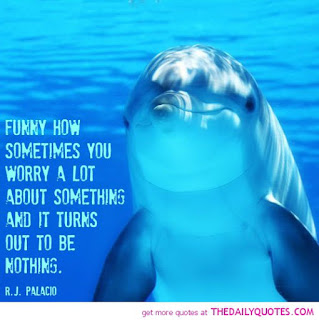 I'm a little bit proud of myself that I did manage to control any anxiety about it most of the time and certainly didn't let it overwhelm me like I might have in the past. Maybe I'm finally getting a handle on my anxiety.
Posted by Char at 6:26 PM