In Search Of Adventure (Of The Non-running Kind)

The night before the marathon I was sent a quote by Sue, who I'd done a lot of my training with. It was one of those quotes - exactly the right words for exactly the right occasion. 'Life is either a daring adventure or nothing.'

All through last week I'd been thinking about those words. Thinking about adventure in my life and realising that there really wasn't very much of it. Life can easily become too comfortable and routine. Iven and I had pretty much zero adventure in our lives. What would it hurt to shake it up a little?!

An opportunity came sooner than I would have thought. A few words on the weather report. An Antarctic blast of air. Chance of snow. A thought was planted.

A lot of you won't understand just how exciting the idea of snow is to someone who lives in a subtropical climate. It NEVER snows in Brisbane. It only snows in Queensland once every twenty or thirty years. And for it to maybe, possibly snow on a weekend within a couple of hours drive - too good an opportunity!

Iven and I were awake around 4:00am and on the road by 4:40. Heading to Stanthorpe in the dark. A couple of old farts in search of a little adventure. Actually, an old fart and his much younger trophy wife in search of adventure.

Doing something spontaneous is wildly out of character for both Iven and I. So we were as giddy as two little kids as we hit the road. Or maybe we were just sleep-deprived. There was banter and conversation - we've been married almost 30 years so you'll probably understand just how rare that is.

It's a two and a half hour drive to Stanthorpe - the most likely chance in Queensland. That was a long time to be wondering if the drive was going to be a wasted journey.But I decided that it really didn't matter. We'd had nothing else planned anyway and the worst the day could be was a drive in the country with a couple of cafe meals.

We got to Stanthorpe just after 7:00 and found a really nice cafe for breakfast (Cosmo Cafe if you're ever in Stanthorpe). Iven got chatting to the barista. That in itself shows just how excited he was - he's usually not a chatter. We found out that there were reports of snow in Tenterfield which was only about 30 minutes away so the plans for breakfast were shelved and the coffee put in takeaway cups and we were off. 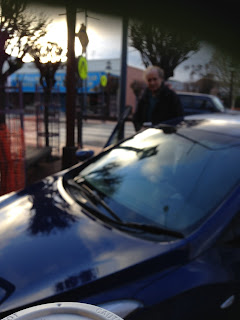 The clouds looked menacing on the way to Tenterfield. But we got there and nothing. So we kept going and just outside of the town we saw a sign that said something about sleet and snow and proceeding with caution - but I was too slow to get a decent pic. Bad blogger! 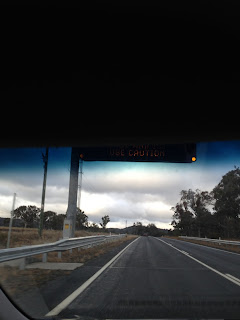 The temperature on the dashboard was looking more and more promising. Surely it has to snow when it hits the magical 0!! 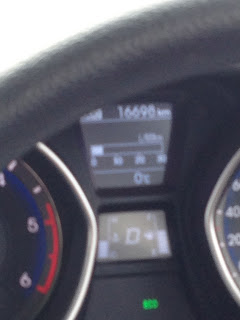 And then, finally, the menacing clouds produced rain. But it wasn't like the rain I was used to. The drops were slower. Almost floating. Was it sleet? No. It was snow! We were in the middle of a blizzard!!!

Okay, it wasn't a blizzard but it was falling snow and that's close enough. There were patches of white on the sides of the road and both Iven and I agreed that it was totally worth driving for four hours to find. 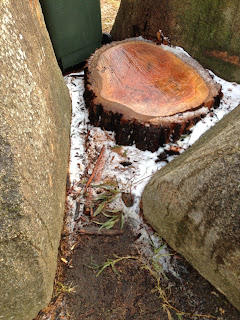 We ended up in Glen Innes trying to find a cafe for our long-delayed breakfast and then had another long delay when our food order went missing. But the bonus was that we ended up not having to pay. Snow and a free breakfast - could this day get any better?!

While we were waiting for the fruit toast that took over an hour to arrive, we'd been on-line looking for places where there had been fairly decent falls and there was a place, Mt Mackenzie, just outside of Tenterfield that had had a dusting so we hopped back in the car, turned it around and set off again.

But by now it was quite late and the sun had come out so there was every chance that whatever snow had fallen was now melted. But we went on. Just in case.

Sure enough, the white wonderland of the morning had disappeared but there were lots of people walking in the bush so we decided to park and explore. And I'm glad we did. Little pockets of bushland had been more sheltered from the sun. There was still remnants. And it was beautiful! 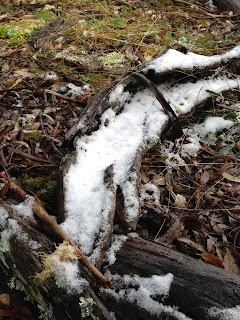 We played around for a little while. Until our fingers were so cold that we couldn't feel them any more and then headed off. Adventure successfully complete. And not even the flat tyre on the way home could ruin our moods. 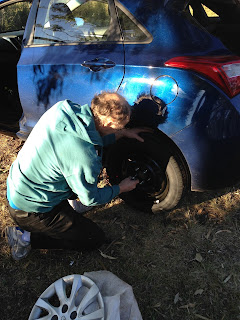 We've already planned our next adventure.

This could become addictive.
Posted by Char at 7:07 PM