The Weekend In Review

It was inevitable. Bound to happen. No bookie would have given decent odds on it.

Getting a post-marathon cold is just one of those rights of passage. Especially when nearly everyone around you is sniffing into tissues. Run for four hours and it will have a negative effect on your immune system. I'm not sure if the negative effect lasts for almost three weeks but I'm happy to blame my present state on the marathon. I'm just grateful that it happened now and not three weeks ago because I feel crap.

I hate being sick. Not that I'm really sick - just sick enough to have no energy and want to lay around and watch really bad movies all day. And drink tea that I've guilted my husband into making for me. Guilty tea tastes so much better than regular tea. I think it's the salt in the 'my poor darling is sick and I could lose her and then who would make me cake?' tears he spills. I've gotten good at faking imminent death so I can get just one of these delicious beverages served to me on the couch while I control the TV viewing. And my grade 8 English teacher gave me such a bad mark for acting.

I wasn't sick enough, though, to miss the long slow run for the week. Yeah, I didn't feel great but I did the above/below neck check and all my symptoms were in my head (and I don't mean in the hypochondriac sense) so I figured it'd be fine to get the 16k on my program done. Running it with the fast boys and Sue was just an added bonus. A special treat for me in my weakened state. It felt hard! It felt hard enough for me to say that I didn't mind being left behind - and I hate admitting weakness like that. I didn't actually get left behind so yay for me but that could have been one of the reasons why faking imminent death wasn't so hard in the afternoon.

Unfortunately the novelty of lying around and being waited on wore off pretty quickly. So I'm now at the 'I want to just be doing normal stuff but I'm still feeling a bit too blah to actually do it' phase. Hopefully I'll wake up tomorrow and everything will be back to normal. I'm really not a good patient. Or a patient one.

I'm not the only patient in the family. My poor baby had to go to the vet on Friday to get allergy tested. We've bitten the bullet with Toby and dived in to the world of veterinary specialists because I'm so sick of his skin infections and having to deal with a bucket-headed dog. Oh, and I do feel sorry that he feels itchy nearly all the time.

So Friday we drove for half an hour to pay an exorbitant sum to have Toby play pin-cushion. Half an hour isn't really that far but it can seem like it when your dog is almost choking the whole way because he wants to sit on your lap for the drive but he has a restraint preventing him. He was incredibly excited to finally get there and go in to the surgery but a lot less excited when he realised I wasn't going in with him. He's such a mummy's boy!

And then he was returned to me like this. 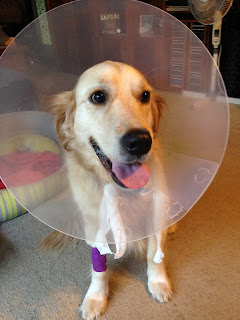 They did the test on his chest near his front leg. Which just happens to be one of the only places he can scratch with his back legs. And he wanted to scratch! Those tests had stirred up a hornets' nest of histamine release. Luckily the vet had had the foresight to give me some cortisone to keep him comfortable or he would have torn himself to pieces. 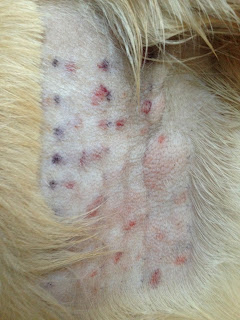 So the next step is desensitisation shots. Also a very exorbitant procedure but Toby is only three and has quite a few years left in him (I hope). It will save us a lot of money in vet bills over the years if these shots improve his condition. And I'll feel happier that he's not so incredibly itchy. 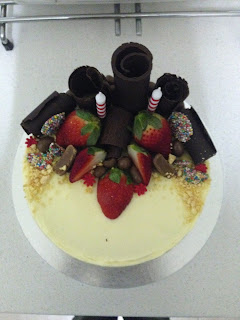 But I figure if I'm determined and practice enough I'll master fans one day. And in the meanwhile I have all these failed fans that I can't bear to just throw away. Failed baked goods have no calories don't they?
Posted by Char at 3:05 PM