I Swear The Internet Made Me Do It

The last run has been run. The last pair of running shoes has been untied. The last sweaty bra thrown into the wash - along with the sweaty socks, tights, undies and singlet. No wonder I always have a big laundry pile.

All there is to do now is wait, rest and eat. And keep my brain from thinking too much.

I'm guessing that my fellow marathoners are all in the same boat after a very innocent conversation about our food plans for Saturday night somehow went a little awry down a path of puppies, pasties, pole-dancing and progeny-shaming. Admittedly I was the one doing a lot of the off-topic steering but when presented with a comment of "I'll be entertaining/cooking for the people who are putting me up for the night" who wouldn't immediately think of gold tassels and a choreographed pole routine?!!

From there the conversation deteriorated until the boys got into a pissing competition of likes. And it was rapidly getting out of hand (please, please get the subtle pun) until I stepped in and shut it down with the mother of all likes. 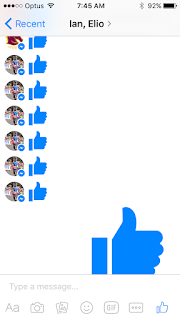 Who says that size doesn't matter?

Yes taper-madness is real. And it's kinda fun too.

But in all seriousness, I'm not remotely anxious about Sunday's race. I've done the runs. I've done the strength work. My body is feeling rested and recovered. And I've got a secret weapon that I'm going to use when it starts to really hurt. Let's be honest here - it is going to really hurt at some stage. I'm just hoping that it's later rather than sooner.

When it gets tough on Sunday I'm going to swear. Like a trooper. Cuss, curse, turn the air blue. Make my mother's hair curl without a perming solution. I'd suggest that if you're spectating with children to bring noise-cancelling headphones to protect their sensibilities.

The first reason for swearing is pain relief - "Swearing activates the so-called 'fight or flight' response, leading to a surge of adrenaline and a corresponding analgesic effect. Richard Stephens of Keele University in England found that people who swear are able to hold their hands in ice-water for twice as long."

And the second is power and control - "Swearing can give us a greater sense of power and control over a bad situation. By swearing we show, if only to ourselves, that we are not passive victims but empowered to react and fight back. This can boost our confidence and self-esteem, and also provide the impetus for further corrective action to be taken."

Thank you World Wide Web for providing me with yet another answer to my dilemma-filled life.

I'll let you know next week if it works. Or if I was arrested. Either way I'll have an interesting post to write.