No Doubts About It

I had a big moment of self-doubt yesterday

I was pretending that I was a real business woman and went for a real business meeting. Luckily I didn't have to do anything crazy like dress up for it - it was a business meeting with a friend after all and friends don't make friends wear heels. She's a graphic designer and I need a logo for my new business - match made in heaven.

We talked a bit about what I was wanting to do. What image I was trying to get across. What sort of thing I wanted for the logo. Then she started talking about the website and that's when I realised that I have no idea what I'm doing.

Websites need planning. You need to know exactly what you're going to put on every page. It's not just about some pretty pictures. You need words to go with the pictures and size guides and order forms and payment options and return policies and probably a lot of other stuff that I've already forgotten. Because I'm at an age where I forget stuff  even if I've taken notes. Which I didn't - and it wouldn't have mattered if I did because I left the notebook behind.

She pointed me to a site where I can set up my own webpage. Apparently it's a fairly easy process. But I was less than confident about my technical abilities. Just because I've set up a blog doesn't mean that I have skillz in that area.

I briefly thought 'I'm too old for this' and 'do I really want to be bothered?' and 'you could outlay a whole heap of money and not have it work'.

Doubt was putting excuses in my head. Doubt was wanting me to shut the whole thing down and just continue plodding along with work in status quo. Not a good thing when some weeks I haven't been getting any.

I've had a lot of practice talking down my self-doubts this year. And I'm getting pretty damned good at it. That doesn't mean that the self-doubts happen less. They definitely don't. It just means that when they do start shouting at me I can shout facts back that shut them up - or at least quieten them down. It's kind of awesome to have finally learned this life skill.

So I walked away from the meeting knowing that yes, there's a lot of hard work ahead of me. But that I'm perfectly capable of working it all out. Or sourcing people who can work it out with me.

And then I went out a bought a new notebook.

I have stuff to plan. Over coffee and a scroll. And the crossword. 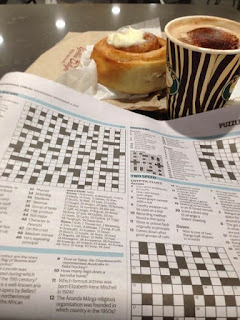