When The Universe Speaks ...

The universe has been trying to tell me something lately.

The universe has often tried to tell me stuff but I'm either not very attuned to subliminal messages or I'm just so obstinate that I refuse to listen. I've never really liked being told what to do.

It all started last Wednesday when I went for my meeting with the lovely Bek, who's going to design my logo. I left my notebook there. But it didn't have a huge amount in it so rather than go back I just bought another one. And I wrote a heap in it that evening because I'd just talked with Bek and Bek had great ideas and I needed to get them down before I forgot which I'm fairly prone to do. Then I just left the notebook on a low chest that was low enough to be in Ricky's reach.

Woke up to this the next morning. 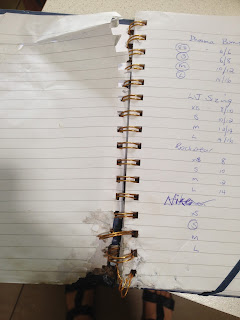 I probably could have persisted in using it but it had been so pretty and un-slobbered-on and the pages had turned over so much more easily before they'd been deformed by Ricky's malicious teeth full of evil intent. It would have bothered me so much every time I went to use it that my creativity would have totally shut down. And besides, it was only $3:00. So I went out and bought another one.

The next one was even prettier. Bright pink with gold spots. Sure to inspire exceptional creativity. I was so excited to find it on the shelf in KMart. Excited enough to fork over $5:00. Don't worry - it'll be tax deductible as long as I can find the receipt.

I paid for it and declined the plastic bag because I like to do my bit to save the planet and I'd hate for a turtle to die a horrible slow death of starvation just because I'd been negligent. And besides I already had a plastic bag that had enough room for me to shove the notebook into. Pity I didn't actually think about what that plastic bag was carrying .... (cue ominous music)

I got home and pulled out this pretty pink source of inspiration and creative genius only to find the bottom of it covered in a warm, brown jellyish substance that smelled distinctly of roast chicken. Oh yes, I'd had a warm roast chicken in that bag and it had leaked out of it's own bag all over my milk and my dreams.

Ok, maybe a little melodramatic but I did say a little swear word out loud. Possibly loud enough for the neighbours to hear but they're getting on in years so I'm banking on deafness setting in. I didn't really want to have to lock up the house and get back in the car and drive back to the store and find another parking space just to buy another notebook so I set about with a paper towel to clean up the mess while trying not to slip on the drool-coated tiles or trip over the three dogs which we must never feed because they're always starving.

And it really did come up pretty well. At least the pretty pink cover did. The inside pages were a little damp and warped at the bottom but I figured they'd dry so I left it on the bench and went to do some real work.

At about 1:00 I came up to get some lunch (chicken salad if you must know) and found the kitchen abuzz. Flies everywhere! I might have thought I'd done a reasonable job cleaning up the chicken juice but that black swarm told me otherwise. And at that point I got the message that the Universe was trying to send. Go digital! Use the computer and smartphone for your notes!! Use Dropbox or Evernote or one of the other apps that will send info from one device to the other. Embrace the 21st century and the technology that you have at your fingertips.

So do you know what I did? I said 'screw you, you're not the boss of me' to the Universe, sprayed the pretty pink notebook with a bit of surface spray and have felt empowered every time I open it up. I am the author of my own destiny - not the Universe! I also remember to put it up high out of the reach of curious canines when it's not in use.

And talking about curious, hungry canines, there have been a couple of 'incidents' in our house in the last few days. Chewing incidents. And I was just starting to think we'd gotten through Ricky's puppyhood relatively unscathed.

First it was the notebook.

Then an entire roll of toilet paper.

Then finally, a new box of tampons. 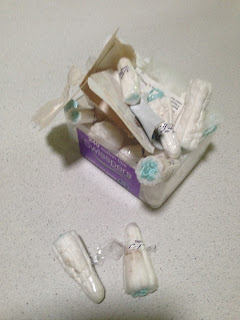 I've noticed that his tastes tend towards paper and it was his first birthday last week. A birthday is like an anniversary and tradition has it that the first anniversary is the paper one. Coincidence? I think not!! I'm so glad that dogs don't live to 60 or in 59 years I'll be having to hide my engagement ring.
Posted by Char at 2:16 PM