It's our 30th wedding anniversary today. Yay us! For 30 years we've resisted the temptation to mortally wound each other with knives, add poison the the other's night time cuppa or drop our loving spouse off in the outback and see if they could make it home under their own steam. A milestone (oops nearly typed millstone) that should be celebrated.

Most normal people do stuff like throw family and friends a little party. Or a big party. Or they go out and have a nice meal. In a fancy restaurant. With white table cloths (that aren't butchers paper that you can doodle on with the supplied crayons).

But we're not normal. And we don't bow to conventions. Actually, after what we did yesterday there's not a hell of a lot of activity happening from the waist down so bowing is totally out of the question.

We did not don our glad rags. Instead, we found our rattiest pairs of jeans, drove out to Mt Tamborine and went for a trail ride. On a real, live horse. Make that two real live horses because both of us on just one horse would have been cruel.

Iven has done a lot of riding in his time. Me, not so much. When I was about eight I was led up and down the beach for about ten minutes which confirmed my conviction that horses and I had an affinity and my parents should encourage this affinity by buying me one. Yeah, that never happened. Then I had a couple of riding lessons when I was in vet school which confirmed my conviction that you really need to learn while you're young so my parents' reluctance to buy me a horse had ruined any chance I had of being a jockey.


Then there were the couple of rides that I did with Iven when we were courting. Romantic rides. With his sister in tow. And his niece and nephew who were both good riders because they'd had horses when they were young. Not sure if it was the saddle or my anatomy or my posture but I removed a nice big patch of skin over my tail bone on the first ride so when we went riding again just a couple of days later Iven had to tape one of his sister's sanitary pads over the scabby bit just so I could come along. And he still asked me to marry him.


So with all that horsing around in our history, going for a trail ride seemed an obvious choice for such an auspicious occasion.

We were introduced to our mounts for the day. Iven got Simon and I got Bert. I did wonder if this was a bad sign. Surely it should have been Ernie that Iven got! Where was Ernie? Had he gotten a disease with a prognosis that there's no coming back from? Had all of those rings around the bathtub from the endless baths with that rubber ducky finally tipped Bert over the edge and forced him into a little Dexter-like problem solving? Or had they just grown apart after so, so, so very long together? 30 years is a really long time but they'd been together since 1969.

But it turned out that Ernie was there. He was just a bit little for either Iven or I. And he's still Bert's best friend. So, yeah, I probably had read too much into it.

Iven had booked us the 90 minute hilltop ride. I was a little concerned that it might be too long and I'd get bored, or I'd get a naughty horse that I couldn't control and he'd take off down a hill and jump over a gully and I'd be left clinging and screaming which would only make the horse run even harder (yes, this has happened to me before) or we'd fall off the top of the mountain and die in an avalanche of mane and hooves. But only a little concerned.

No need for any concern at all. Bert was beautifully behaved. He just fell into line behind Simon and off we went. It was ninety minutes of relaxing and enjoying the bush, the birds, the smell of the lantana. And as for being bored - not even once!


Maybe not traditional or what people think as romantic but when your husband tells you that you're beautiful even with helmet hair then you know the love's real. 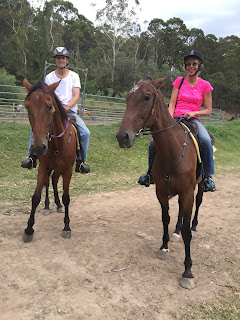