I much prefer tweaking. (That's tweaking - not twerking.) The things I'd like to tweak are small and involve doing more. More smiling. More laughing. More saying yes to new experiences.

I spent a bit of time last year thinking about life. About what I want mine to be when I grow up. And one of things I decided that I really wanted was a big life. I've seen a lot of older people who let their worlds get smaller and smaller until it exists only in their home and a couple of select, safe locations. Their friendship circle gets smaller and smaller. Their universe just shrinks. The older people I've admired haven't let that happen. They stay involved. They expand their horizons by joining groups and volunteering. They make new friends and their lives are richer and fuller for it. They say yes to new things because why the hell not?!!

I've already said yes to my first new experience - and it's only days into the new year. Yay me! I'm giving myself a gold star!! All tweaks that are achieved should be rewarded with a gold star. Or a piece of rocky road. Or a new running singlet. My latest batch of rocky road hasn't yet set and I already have enough running singlets so I'll have to make do with a virtual gold star.

And my new experience? My first parkrun.

My long run crew had decided that it might be fun to do some of our Saturday long run early and time it to finish just before parkrun started. When I heard about it my initial reaction was 'That's not what I usually do' and honestly, being a creature of habit, I was a little hesitant. But it didn't take me long to realise that running is running whether it's just with the few friends that you usually run with or the dozens of new friends that you just haven't met yet. So why the hell not?!!

I said yes. Then I registered and printed out my barcode.

Then I told Iven I'd said yes and he did something surprising and completely out of character. He said that he'd like to do it too. My Iven! Running!!! You could have painted me green and called me a cucumber. Pinned on my tail and called me a donkey. Knocked me over with a feather. But hey, if I'm embracing new experiences, why shouldn't my husband?

So I registered him and printed out his barcode.

Saturday came and I got to sleep in. Till 5:00. Met the group at 5:45 and we headed out to pay homage to the camel toe tree. 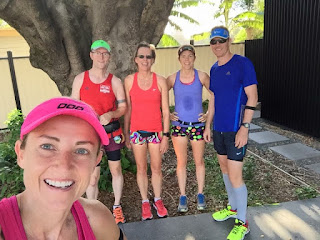 We got back in plenty of time to find Iven and get him to the starting line. We lined up and started before I'd even given a thought about how I was going to run it. Okay, I had given it a little thought - maybe just slightly faster than our cruisey long run pace - but put me in a crowd and somehow my brain switches to race mode and all intentions of cruisey go out the window. I wanted to break out of the mad crush of the start and just run unimpeded so I went with it.

It was so much fun! Because I hadn't started right up the front I had lots of runners in front to try to run down. Picking them off one by one never gets old. The steps and bridge that we had to run up and over slowed that down a lot but by the time we got over the other side there was only about a kilometre to go so it was just a matter of holding on and not letting too many people pass back. I knew I'd run solidly even though we'd already done over 10k so I was pretty happy. 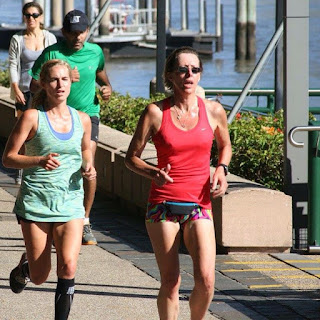 The best moment of the morning, though, was cheering Iven in to the finish. He'd intended to mostly walk and do a bit of running if he could but he ended up running the entire way except for the steps and bridge. What a champ! And he finished second in his age group. 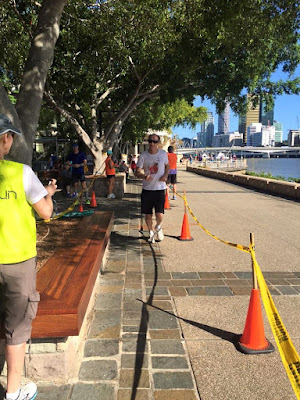 Today we went out and bought him a complete running kit so he can look like a real runner. Because he is a real runner now. 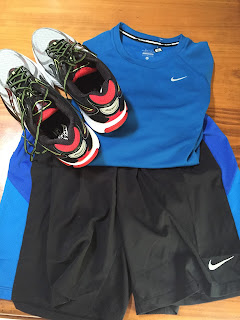 I can definitely see more parkruns in our future. It can really pay to say yes to new things.
Posted by Char at 12:12 AM