The Exodus Has Started

I'm torn between crying and celebrating.

It's a bitter-sweet moment when your kid packs his bag and wishes you adieu. All the memories of my little Lukey came flooding back. The nights spent rocking him with his endless earaches. Trying to get the grease off him after he spent a couple of quiet hours trying to figure out how Daddy's bike worked. Listening to him giggle while he was reading his favourite Judy Blume Superfudge books. The frantic morning drives to try to get to the City Cat on time so he didn't have to catch the bus - because he didn't like riding the bus in the mornings. That time we took him out to dinner only to have him throw up all over the floor at the dessert place because he really didn't have any more room in his stomach. Ahhh - precious memories.

He and his girlfriend Becky took a 12 week trip to Europe last year and since they've come home it's been increasingly hard for them switching between her parents' and our places. They needed somewhere to call their own and they managed to find somewhere fairly quickly.

When your kid tells you that they're going to move out you start to hope that all the things you've tried to teach them over the years have clicked. That they'll be able to feed themselves - and I'm not talking about just buying takeaway. That they'll pay their bills on time. That if something unexpected or unusual happens they'll be able to cope. That you've done your job right and they'll be able to muddle their way through adulting just the way we did.

And they seemed to be doing great. Sorting out the lease. Organising electricity and internet. Buying a fridge and washing machine. Working out a budget.

They moved just a couple of days before we took our road trip to Port Macquarie and Saturday I finally got to see their place for the first time. Yeah - ten days after they'd moved out. And I'm trying to placate that voice in my head that's been telling me I'm a bad mother for leaving it so long by reminding it that I baked brownies for them to have a little piece of home in their new home.

It's a lovely unit. Not too small. Two bedrooms. A fairly new kitchen. Nice bathroom. A little patio to sit and watch the sun go down at the end of the day.

We got the grand tour and I checked it all out. Checked out the fridge to make sure it wasn't just filled with beer and wine - that there was at least some food. And there was. Checked out the walk-in wardrobe. More space there than my wardrobe. Checked out how much storage room they had by opening up the linen closet and found this ... 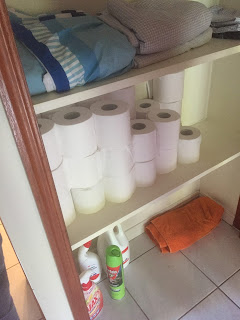 Enough toilet paper to deal with a Norovirus outbreak on 10 day cruise.

Yeah, they're going to do just fine.

And in other news, my friends organised to have a special run on Saturday in honour of my birthday. All the girls and one of the boys wore their Run Amok tights and photos were taken for promos. My favourite was the jumping one. It embodies the ethos of Run Amok. Fun, crazy and joyful. 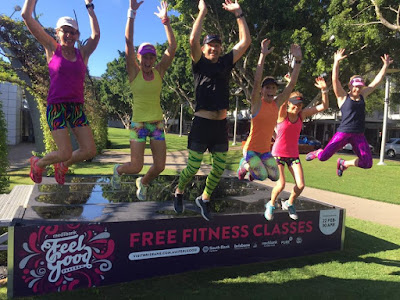 But what you can't see here is what happened a split second later. Let's just say I didn't stick the landing. Could have been because my legs were tired from the 20k run we'd just finished. Or because these 53 year old legs don't have the stickability that their 10 year old version had. Or it might just be because I'm a klutz. Luckily nothing was hurt except my pride. At my age it could have been a broken hip and that would really have screwed my running plans for the year.