The PB That Wasn't

I was elated and amazed.

The day before I'd hardly been able to get off the couch. I'd run a pretty cruisey 12k long run (tapering for next weekend's half marathon) but within hours had felt achey, shivery, exhausted. And disappointed because I'd wanted to see what I could do at the International Womens Day 5k. Saturday afternoon I didn't even know if I'd be able to run it, let alone race it.

But Sunday morning I felt okay. Decided that it was a 24 hr bug and I'd be fine to run. I still might not be able to race it like I'd wanted but at least I'd get around the course without collapsing. So I dressed in my pinkest clothes, drove into the city and met up with my friends. A quick photo and a kilometre warm up then we made our way to the start line. 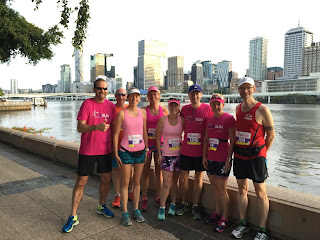 We got a great position. Last year I'd hung back and paid the price on the bridge when I got stuck between people who were already walking. That mistake wasn't going to be repeated this year. Apart from the two ladies who were talking about hoping to get under 30 mins - obviously had no idea that if you are hoping to get the cut-off for the group then you shouldn't be at the front - you could tell we were surrounded by serious runners. Some waiting, some formalities, a quick warmup to blaring music (now I remember why Firework was my earworm for this race) and we were off.

The first bit of the race is over the Victoria Bridge. It's basically a little hill so I wasn't surprised that I was breathing heavily quickly. I got to run fairly freely until just before the crest of the bridge where there was a group of schoolgirls just trotting along and I had to slow till I could get a break to pass. I didn't look at my watch. Had no idea of the pace - until my watch beeped and I realised that it was probably way too fast and I might be in a world of hurt before too long. First kilometre 4:13

Kilometre 2 also had a hill in it. I'd tried to slow my pace enough so I was still running a pretty good pace but so I wouldn't have to walk before the top. We'd done this hill in speed session on a stinking hot day not long after Melbourne marathon so it doesn't hold great memories for me. I kept reminding myself that there was a downhill on the other side and that got me to the top. The downhill felt great and we got to check out what was for sale in the markets that lined the course. 4:34 - that's a bit more like it.

I don't like it when I'm starting to wish that the race was over even before the halfway mark. The voices were starting up in my head and there was a particularly disputatious one that was arguing against the feeble voice of my inner cheerleader. It had nothing good to say. No words of encouragement. It was all about death, pain and the stupidity of old women who don't know how to pace themselves well even though they've been running for decades. Luckily I can multi-task and could still manage to push on despite having to try to devise arguments to rebut the sound reasoning of my inner nay-sayer. Kilometre 3 - 4:40 which actually happened to be the pace I'd intended to target.

Kilometre 4 is the Goodwill Bridge kilometre and I'll be quite frank when I say that there was not a lot of goodwill in my feelings towards having to cross it. I'd run it just the day before with Jodi in an imaginary race against a girl that had passed us a little earlier. We'd been triumphant on Saturday. Sunday it was just a death march. I had nothing left to push any harder so when a couple of friends passed me all I could do was wave them on their way. Having a downhill didn't even help. 4:50.

It was such a relief to know that the last hill was done and the rest of the course was flat. I run at Southbank all the time so I knew that section of the run intimately. The tree we meet at for speed. The 'beach'. Our 500m mark just past the building that juts out. The rainforesty section. Then there's the Wheel of Brisbane , veer left up a little slope, through the arch and it was over. Stop the watch. 22:14!! Worth every second of the pain.

The elation lasted for possibly a minute until someone asked if I'd gotten a short reading on the course. 4:82k was on my watch. Poo, poo, poo. Not a pb. Not an anything really. Still we all crowded on to the podium because we're all winners! 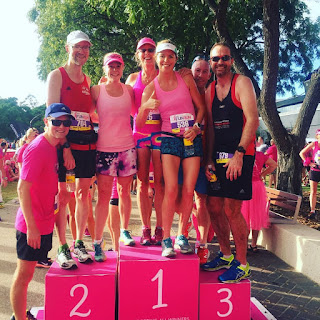 It was weird not knowing how to feel about the race. But I did feel pretty excited that a pair of my tights won overall. Well done Clare Geraghty - you make my tights look good. 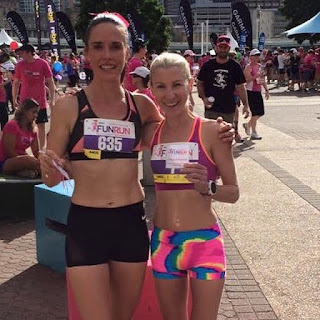 And then there was this. Made me feel a bit less ambivalent. 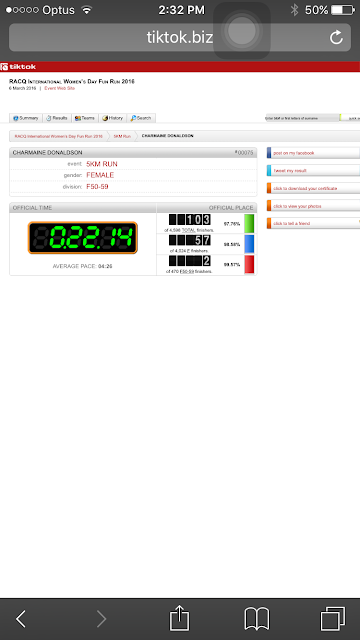