The weekend was looking full of possibility on Friday. #1 son was visiting his fiancée at the coast. #2 son was off to Singapore for a long weekend. Iven and I were going to have the house to ourselves. Bliss!

And then Iven came home from work. With the flu. Real flu. He's a man - so it's real man flu. Not just a cold that miraculously is called flu because he's a man.

This was serious. Not the flu part. He'll probably be sick for the best part of a week and then be fine. And the fact that he collapsed in the hall on the way back from a toilet visit was most likely due to his normal hypotension on top of the virus. Nothing to get too alarmed over - even though being woken from a dead sleep at 4:00am by your husband collapsing in the hall is a little alarming at the time.

The serious part was that all my weekend plans dematerialise in a blink of an eye and I was looking down the barrel of having to take on Iven's hardest chore. Walking that black and white devil disguised as a cute dog.

Iven takes all three of the wolf pack for a daily walk. Well, almost daily. Sometimes life gets in the way and it just doesn't happen. Two out of the three of them are beautiful on the leash. They just trot along obediently and occasionally pull you up when they find something interesting to sniff.

Not the hellhound. He must have heard me mention that Dalmatians were originally bred to be carriage dogs and thought I meant that they pulled the carriage rather than ran alongside it. He's been in training to pull carriages ever since. Ricky gets a leash on and once he's out of the gate he's a dog on a mission.

I decided that I couldn't possibly take all three dogs on Saturday so Bubbles would have to stay home. She's like 115 in dog years so a restful evening was probably a nice change. I had just under my own weight of dog-power on the lead and we were taking no prisoners. I have never walked up hills that fast. Down hills were even more terrifying. Down hills with a scrub turkey in the distance were an unimaginable horror that I had to face. Twice.

There was swearing. Lots of swearing. Boatloads of scurvy sailors' worth of swearing. Out of fear. And anger. I made it home in one piece and swore (with a lot of the words I'd been using on the walk) that I'd never take that #### $!@$ dog for another walk in his lifetime - which I was hoping would be very short.

But then this happened. 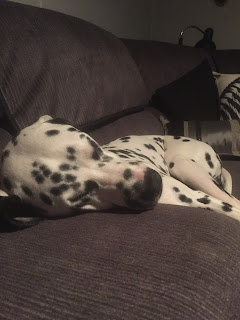 He looked so cute and adorable that I forgave him. And tried to work out a better way to walk him. That didn't involve a taser - because I don't have one.

So I came up with a plan. I would take Ricky for a little run. Alone. Surely I could manage 25 kilos of stupid on a leash?

Again it was a terrifying flight of potential disaster. And I do mean flight because my feet hardly touched the ground. My internal dialogue was mostly every swear word that I knew and a few I made up to suit the occasion. I can't even promise that my internal dialogue stayed internal. A few of the expletives may have slipped out under moments of extreme duress.

But again, I survived. Only to get home and have to repeat the process with the two patient pooches who'd been waiting at home for their turn. Another four and a half kilometres but this time at a much more pleasant pace.

Today I'm sore all over. I'd guessed that my shoulders would be sore but I'm pleasantly surprised that my core got a work out too. Maybe I could market Ricky as the perfect all-over body workout and hire him out as a personal trainer.