Some days I wonder why I do it to myself.

Most 53 year old women lounge around in bed until their hot flash alarm system gets them up. And most 53 year old women don't pretend they're Paula Radcliffe or Kara Goucher (or their slower half-sisters) and run speed sessions that have me wanting to go to bed for the rest of the day - except that I can't go back to bed because there's that pesky little thing called work.

This was kind of how I was feeling on Saturday morning in the short 5 minutes that I had between waking up and knowing that I had to get up to get to the run on time. I was tired. It had been one of those nights. Where I toss and turn and can't fall asleep but then realise that I have fallen asleep probably half an hour before the alarm is supposed to go off. I'd been stupidly tired the day before. For no good reason that I could think of. I'm just thinking it's a little gift that menopause is bestowing on me.

But the thing was that there were only a couple of us running and I didn't want to deprive anyone of my scintillating conversational skills that are at their peak at 5:00am when I've hardly slept. So I pulled on my big girl panties made of the funky rainbow zebra fabric and tried not to think about the two and a half hours of running that I was going to do.

In my head I allowed myself to pull the pin at any stage where I just wasn't feeling it. I could turn around early. It could be a 10k-er for all I cared. I could surely do 10k. Or if I warmed into it I could just do the first 20k and then call it quits. Craig only had a 20k on his program so I could stop when he did. Jess wouldn't mind running the last 30 or so minutes by herself.

But something happened on the run. That fatigue that I'd been feeling the day before just seemed to slip away. We ran, we talked, we listened, we watched the sun rise, we saw other runners and cyclists and walkers doing what we were doing and I knew I was exactly where I was supposed to be. Running along the river with my people. Enjoying the best part of the day.

Running isn't just running. It's not just about getting fit or losing weight. Running is experiencing life. Breathing in the freshest morning air. Seeing those little things that can surprise and delight. It's sharing laughs and dreams and those things that are hurting you inside but hurt less when you get to share them with people who have sweat and strived and gasped alongside you kilometre after kilometre.

I finished the entire run on Saturday. All two and half hours. And it was probably the best two and a half hours of the week. Closely followed by the hour and a half tempo running on Wednesday morning and the hour recovery run on Friday and that hour on Tuesday that we were running 1k reps at South Bank. Not necessarily in that order.

Yes, they were all runs but the thing that made them so good was the people. My tribe. So now I think about it, I am not doing it to myself - we are doing it together. We may each have different goals but we're there supporting each other. Helping each other achieve them.

That's why I get up out of bed when I'm tired and it's dark and my bed's warm. And that's why I'll be doing it for as long as I possibly can. 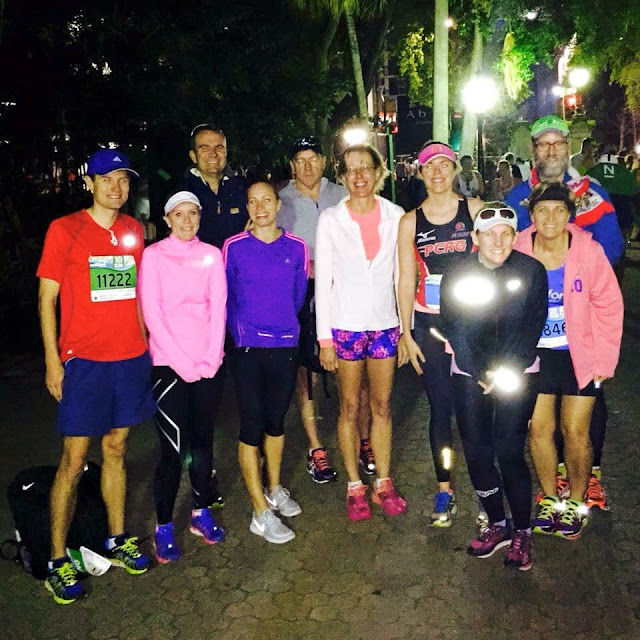