Anyone else been swept up in the Pokemon Go craze?

My sons were really into Pokemon when they were young. I knew all about Ash and Misty and Team Rocket and Pikachu and Pokeballs. And then time passed and they grew up and I forgot. Until a couple of weeks ago. All of a sudden they were talking about it again.

I had some vivid deja vu moments. My sons were going on hunts to catch Pokemon. But not imaginary ones any more. Real, virtual Pokemon. And they sounded like they were having fun. Good, clean, healthy fun. So I hopped on board.

Took me no time to catch my first Pokemon. A Charmander for Charmaine. Couldn't have been more perfect. I was hooked. The excitement of the chase. The collecting. The comparing (do you have a Vaporeon with a combat power of 933 because I do?). Hatching eggs by walking - or running - as long as you put them in an incubator first. And laughing with my Pokemon-chasing posse about the nay-sayers. Nothing wrong with a little bit of silly, childish fun. And certainly nothing wrong with a fully grown, 53 year old woman living in a virtual world for a few minutes a day.

But in the last couple of days I found out that there is a dark side to living the Pokemon Life. My health and well-being have been challenged. Twice.

The first was Monday night. My middle son and I decided we'd take the dogs for a walk around UQ after work. For a bit of exercise for us and the dogs and some quality time hunting Pokemon. Oh and bonding. Let's not forget bonding.

The dogs were soooo excited to be having a walk in a new and interesting-smelling place. Especially once we got to the duck pond. Duck poo is like Old Spice to the discerning dog nose. Toby was a sniffing machine which was a little inconvenient as I was deep in Psyduck territory. I'd missed catching one the day before so I was determined to add one to my Pokedex.

The phone vibrated in my hand and there it was - the elusive Psyduck. Right near Josh and Ricky. I tapped on him and got ready to aim and fire off a Pokeball. Or two. Or even three if it took that many. And while I was in that distracted state Toby took his opportunity. He'd spotted a little cluster of real ducks down at the water's edge and he was on his own duck hunt. With me attached. 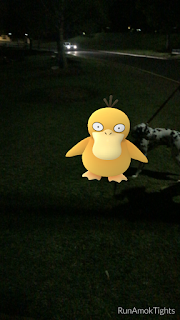 Did you know that it's really hard to stop a determined 32k retriever who has a bit of momentum and the smell of duck up his nostrils? The ducks took flight into the water thinking that would stop Toby but retrievers are water dogs and he wasn't planning on stopping. It was only my significant weight advantage and my equal determination not to go swimming in the university duck pond in the middle of winter that stopped us. Right at the water's edge. Heart racing. Breathless. With the sound of my son's laughter ringing in my ears.

But I caught my Psyduck. So it was definitely worth it.

So I survived my first negative Pokemon experience without any real disaster. Number two happened just a couple of days later.

Wednesday I turned up at the morning run just not feeling the love. I was supposed to do a 16k with a 10k tempo portion. I'd had an ordinary speed session the day before and just felt off for the rest of the day and I wasn't feeling much better after a night's sleep so I pulled the pin on the tempo bit and just ran what-should-have-been-easy-but-felt-way-harder pace and when it turned out to be a kilometre short I didn't worry.

We had our usual coffee and my stomach churned. I went home and had breakfast and it churned some more. Worked for a few hours then had lunch and my stomach churned so much that I threw up. A couple of times. Ughh! I'd caught the virus that had struck Josh down the day before. The same Josh that I'd shared the Pokemon walk and a car ride in close quarters with on Monday just before he got sick.

But again, this experience had its silver lining. I'm a couple of kilos lighter today. So winning! And while I was feeling so disgustingly nauseated last night and not able to go out in the real world to hunt for virtual monsters, I used a lure and caught a Jigglypuff. When life gives you lemons it doesn't hurt to make lemonade.
Posted by Char at 6:46 PM