The Elusive 1:40 Half Marathon

Everything had gone well leading into Gold Coast half marathon. Training had gone well. Tapering had gone well. And my headspace was, well - fabulous, as was my outfit. I knew what I had to do. I knew it'd be tough. But I was going to give it a good shot. And not beat myself up if I didn't reach my goal. I even had a personal pacer/mobile cheersquad of one, Elio, to keep me company when the going got tough. It was as good a time as any to go for my sub 1:40.

Sunday saw me on the start line with 8781 other runners huddled in the pre-dawn cold. Perfect weather conditions. A good starting spot - not too close but not too far back and just in front of the official 1:40 pacer. Pondering whether I should have braved the horrendously long toilet queue for one last nervous wee but knowing it was too late so best stop thinking about my bladder because I'm sure I really didn't need to go again. Well, almost sure.

And while I was pondering the vagaries of my bladder the time had ticked down and we were off. My bladder could wait. There were bigger issues at hand. My magic number was 4:44 and I had to hit that 21.1 times before I could stop.

Kilometre 6 - 4:42. Yep, that's more like it. Don't think about how far you have to go. Just keep running. Those kilometre markers are ticking down nicely and you're feeling strong.

Kilometre 8 - 4:42. Another oops but this time it was almost a trip on a speed bump. Traffic calming measures aren't great for racing. Especially for runners who are economical with their vertical oscillation. A little bit of excitement for a moment but good recovery.

Kilometre 10 - 4:44. Bang on the magic number finally and almost halfway done. Still feeling okay - tired but not too tired. There's still a few good kilometres in me yet.

Kilometre 12 - 4:54. Damned traffic calming speed bumps! One second I'm running along and the next second I'm flying. Then the next second I'm flat out on the road. Like a felled tree. I've never been a graceful faller. Elio retrieved my visor and helped me up. Did a mental checklist of moving parts on the run. A couple of sore spots, shoulder and the side of my calf, and a nice trickle of blood down my forearm but nothing to stop me running. Only lost a little time. My race is not over yet.

Kilometre 13 - 4:46. The running's feeling tougher now. That fall and the adrenalin rush knocked the stuffing out of me. Time to bring in the mental big guns. You want this. You can do it. More hard-core points if you can do it with visible blood.

Kilometre 15 - 4:46. Glad I banked a bit before I fell over to cover the couple of extra seconds.

Kilometre 16 - 5:10. Crap, crap, crap, crap, crap. Where's a toilet?? That adrenalin rush did more than make my heart rate go up for a bit. And the man in the vest on the side of the road could only tell me that the closest loos were in the direction I was already going. The finish line is also in that direction. I hope he doesn't mean that far away because I'm not going to make 5k intact.

Kilometre 17 - 4:46. No loos but taking the foot off the accelerator seemed to help a bit. Maybe I will get to the line without shaming myself. Still not giving up. There's still a glimmer of hope. I think. Maybe. If I can just keep pushing.

Kilometre 18 - 4:47. Only 3k more. Passing the people who passed me when I stopped to ask for toilet directions. Keep running, keep running!

Kilometre 19 - 5:01. Crap, crap, crap, crap, crap. Does no one know where a toilet is?? Everyone I ask has no idea. Real hard core runner poop themselves in races and just splash water on themselves at the next water stop and tell everyone they're cooling their thighs. I don't think Elio would appreciate me being hard core seeing as we'll be sharing a car afterwards. But I do have a pair of tracky-daks in my bag and we are parked near a shopping centre so maybe I could buy some new undies and it'd be all good. What am I thinking? Look for a toilet!! 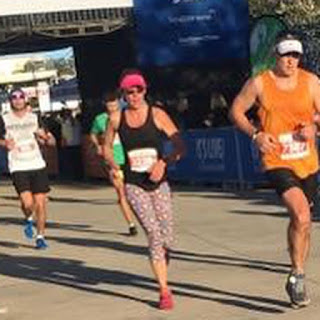 So the elusive sub 1:40 is still dangling just out of reach. But this race showed me that it's within my capabilities. Just have to watch those speed bumps. And lift my feet. And memorise the toilet stops.
Posted by Char at 3:54 PM