I've been training so, so hard for this one. For the last couple of weeks anyway. Since I surprised myself at Noosa and realised that a sub-1:40 was possible. Remotely possible. If I gave it my best shot. Work hard for a few weeks and just see what happened on the day.

Working hard hasn't meant changing things too much. Speed is still speed and it will always be done as hard as I can on the day. Friday will still be my recovery run - and I'm needing that more than ever. Saturday's long run is still a long run. Done at long run pace. Except maybe the last couple of k where I might push the pace just a little. It's the Wednesday runs that have changed.

Wednesday runs have been reinstated to tempo status. They were tempo runs last year but once summer hit they just became another longish run. But now that it's cool and I have a goal in mind, they've become a little bit faster. Actually, a lot bit faster.

These were the runs that I'm certain that made the difference to my running last year. The ones that taught me to trust my body again. The ones that retrained my brain to cope with discomfort for longer. So it was an obvious step to bring them back. But, man, they're hard work!! I'm doing 16k total and at least 10 of those will be at tempo pace - which for me is the pace that I'd like to run come GC half marathon.

This week's tempo run was particularly hard. We'd done 500m reps the day before and that had been a solid session. That'll happen when you're chasing the fast boys. And believe me - they were fast on Tuesday! Then I'd gone home and done my strength work. Speed session + strength work = very tired legs. It was raining on Wednesday when I woke up and I almost pulled the pin. I almost convinced myself that my legs were too tired and I really needed the rest day but the nagging voice in my head made me look at the weather radar. Damn, the rain wasn't going to last much more than a few minutes and I couldn't risk being called soft by my running posse so I went. 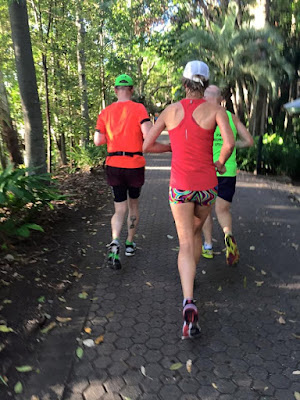 We did the first 4k easy and then I got the prod to get moving. Ughh. Wasn't feeling it at all. I just wanted to run with the group at that nice, easy, comfortable pace instead of having to push on alone. Out on my own. Out of my comfort zone.

But I did it and I was so glad that I did. Because I will be feeling tired and heavy-legged in the latter parts of the GC race. I will want to mentally quit - and if I mentally quit, I generally quit physically as well. I will wonder why the hell I even wanted to set myself a stupid goal in the first place. And when I do feel all the feelings I'll be able to remind myself about this run. About how I could still push to do what I'd set myself to do even though I was tired and hurting and didn't want to do it.

These tempo sessions are doing just that. As I run them I'm practising things I'll need come race day. Things like ignoring negative thoughts. Concentrating on where I am and what I have to do now rather than anticipating how I'm going to be 3, 5 or 10k from now. Finding out what self-talk works for me. 'Feeling strong' worked for me on Wednesday so I might stick with it and use an expletive every so often - just for effect.

Roll on Gold Coast Half. I'm as well prepared as I've ever been before a half marathon. Just have to turn up on the day and see what happens.