I flew down to Melbourne on Saturday. I don't know if I've said this before, but I can be a terrible flier. I carry Valium whenever I fly as a security blanket but Saturday I managed the trip without too much angst. I can't ever eat before flying which was a bit of an issue but I figured I'd try and make up for it during the day. We checked into our hotel then I took Iven for a tram ride to the market and it's the tram ride where my nerves really started to kick in. I saw the MCG (where we were starting and finishing) and felt instantly sick. I had to mentally slap myself around the head and try to think of something else. Needless to say I couldn't eat much for lunch. Not the best the day before a big run.

We met the group for dinner (I nearly chickened out cause I was worried about being sick) and had a lovely evening. I managed to eat! We went back to our room and I tried to get some sleep.

It was a really early start on Sunday. I had to meet Coach Chris and our marathoners in the lobby of the motel at 5:20 (which is 4:20 Queensland time) I'd managed to squash a banana and some bread with honey down my throat but it wasn't sitting too well. The nerves had kicked into over-drive. I couldn't talk because I was afraid if I opened my mouth up semi-digested food would come out. I was thinking longingly of the Valium but new it probably wasn't a performance-enhancing drug. Iven knew by my silence that I was a mess. He held on tight to my hand and gave me moral support which is all he can do when I'm in that state. We walked over to the starting area and were about 40 mins early but I couldn't just relax. I had to keep walking up and down. Iven took this lovely picture of me just after I'd been dry-reaching. 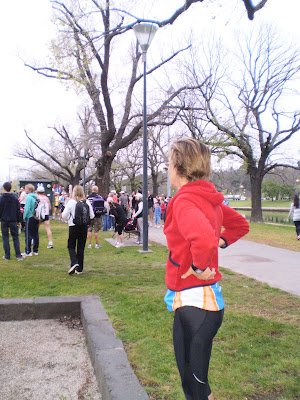 All too soon it was time to start. I joined the runners behind the start line and miraculously the nerves disappeared. 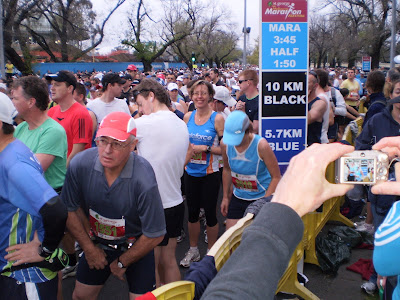 The gun went off and so did we ... after a short delay. I settled into a nice comfortable tempo and kept saying to myself to relax and conserve energy. The first couple of k were slow but there was a bit of traffic and I didn't want to do the dodge and weave thing but by the 3rd k I was at the pace I wanted to run and it felt comfortable. I ran into a couple from our group and ran with them for a while but lost them at a water stop so then it was just me and my music and about 6000 strangers all heading in the same direction.

The k's ticked over and I tried to keep my mind distracted and enjoy what was happening around me. I made sure I took my gel around 10 or 11 k and I was taking water every second station. We ran down to St Kilda and turned right along the Esplanade then looped back and ran past our entry point then back up where we'd come in. This meant that the field looped back on itself twice and I got a chance to look out for the Galeforce Squad members. That was fun and a great distraction. We cheered on each other whenever we passed and it gave me a big lift. I'd had another gel about 21k and was still travelling well.

We turned off the Esplanade and headed back into the City at around 29k and I was hitting my 5:30's or under. At 33k I had a third gel and some water and I think this was where I started to unravel. I got to a turn in the road and came to a sudden standstill. I needed a toilet NOW! I didn't know if I was going to have the runs or throw up and I felt just dreadful. It was right near a big car park and there was a parking attendant watching so I asked him if there was a toilet nearby. Yay, there was, down into the carpark and then take a right. I trotted where he'd told me and found myself in the dimly-lit foyer of an Arts Centre. Someone was playing a violin somewhere and there were mirrors everywhere showing me just how dreadful I look after almost three hours of running. I don't know if it was because I was oxygen-deprived or if I was just tired, but I couldn't seem to find where the toilet was. After what seemed like ages I found someone who pointed me in the right direction. Relief! But then I had to find my way out and I kept walking into dead-ends until I saw the sign pointing to the carpark. Doh!

Back onto the course I was optimistic that not too much damage had been done to my hopes of coming in under 4 hours but I didn't realise that the nausea that had forced me to stop was going to keep coming back. I had to stop and walk every so often. But thankfully the kilometer markers kept coming, albeit a bit slower and I knew that the MCG was getting closer and that soon I would see my cheer squad.

I ran past the 41k marker and heard my name. It was Kylie from my squad. She tucked in and ran alongside me for a little way. Rounding a bend I heard Steve, another squad member. And then there was Iven, Mum, Dad and Jack. I beamed at them and asked jokingly if I could stop now. The finish line was so close. It was just round the bend, under a bridge, through a tunnel then onto the hallowed turf of the MCG (Melbourne Cricket Ground). We had nearly a lap of the oval to run then it was through the finish arch. Done!

I got my medal and some water and made my way up to where Iven was going to be waiting. The Geraghty's, from our running group were with Iven and daughter Clare was holding a trophy. She'd won the half marathon! I'm the giant in the pic. 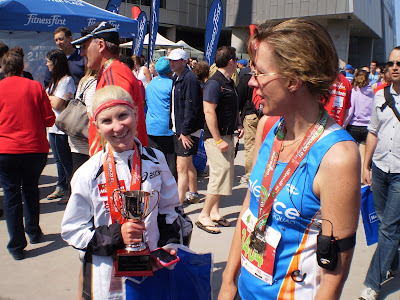 They took a pic of Iven and I and I must say that I'm looking mighty relieved to be finished. 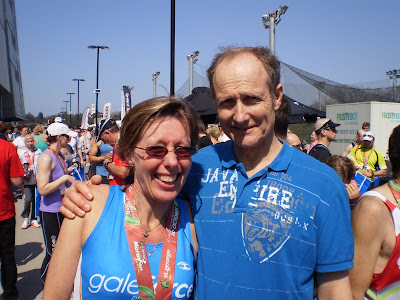 So that's how it went. Will I ever do it again? It's too soon to say. I feel like I've got unfinished business but I have to learn to control my nerves and my stomach. And even though I was a bit disappointed with the time, I've decided that wandering around an arts centre lost in the middle of the race makes for a much more interesting race story.
Posted by Char at 10:04 PM